DO IT: The best table for your salon.

Home • News • DO IT: The best table for your salon.

Roger Hughes, an Englishman living near Orlando, Florida, USA, shares his experience in making a table for his yacht's saloon with his own hands 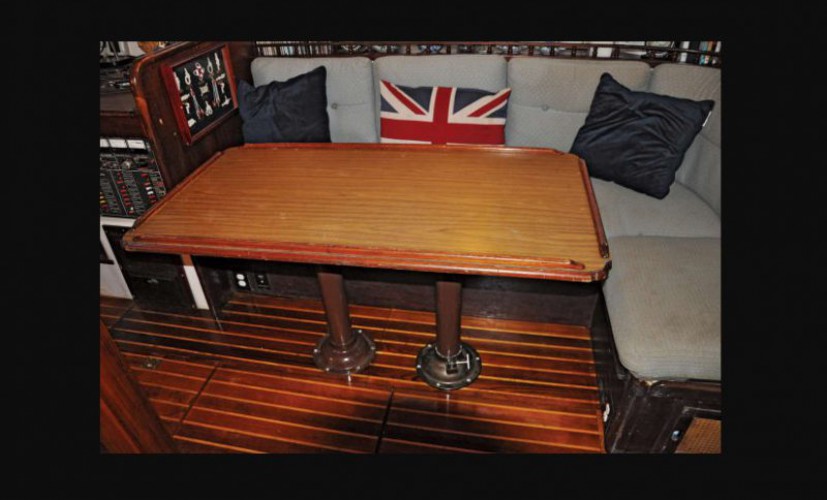 It was reinforced with two large aluminum uprights, which were fixed in a set of large round clamps screwed to the sole.

There were two annoying problems with this "structure".

Firstly, it was rigidly mounted on the left side of the cabin in such a way that people sitting on the sofa on the starboard side could not reach it.

Secondly, it was difficult to squeeze into the aft part, since the bulkhead of the chart table was in the way.

In the end, I decided to build myself a new, more versatile table from scratch, one that could accommodate more than three people, among other things.

My new design will have a narrow, fixed center section with flaps on either side that will swing up to reach both port and starboard sofas.

The ideal table height, given the height of the sofas, is around 28 inches, which means the two flaps can be no more than 27 inches wide.

Otherwise, they would cling to the floor when lowering.

By arranging the leaves of this width to reach the sofas, you could leave 13 inches of space in the middle. This became the width of the fixed center section. The new table will be only 43 inches long.

I started with a 4 'by 8' sheet of oak plywood that I ordered from Lowes Hardware for $54.

The good people at Lowes also cut the size I wanted from this sheet on their circular saw, which saved me a lot of time and allowed me to fit all three parts in the machine. 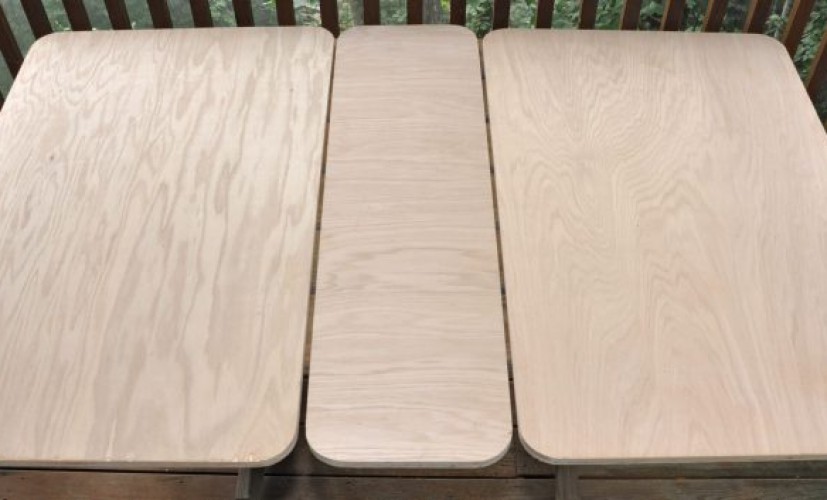 To get rounded corners, I decided to use a round tin lid and then cut the corners with a jigsaw.

I decided to cover the countertops with Formica melamine laminate, which is both hard and scratch resistant.

On the Wilsonart site, I found exactly what I wanted: a realistic looking teak grain Nepal Teak laminate that looks just like the real thing with a shiny finish and which I was able to order from the aforementioned Lowes for $ 94.

When it arrived, I cut out 3/64 "of material to fit each section of the table using metal scissors, leaving a 1/2" allowance around the perimeter.

Then I glued the three pieces onto the plywood using Weldwood "original formula" contact cement.

The bonding of large laminate surfaces with contact adhesive is a one-time process with zero movement due to the instant bonding of the contact cement.

The purpose of the wood batten was to keep the two pieces away from each other while I positioned the plywood directly over the laminate flooring.

After that, all you had to do was slide the wooden slats to the side and press down on the plywood to connect the two layers.

Then I put the boards on some kind of paper on the floor and walked on them in deck shoes.

This applied 75 pounds of pressure as specified in the gluing instructions to firmly press the parts to be glued together.

After the boards lay overnight for the glue to harden, I carefully cut the laminate flush with the edges of the plywood using a vertical cutter and roller bearing guide.

The result is a sharp edge to which I intended to attach the teak trim around the perimeter.

I had some 1/2 inch thick teak slats left over from a previous reconstruction of my bow cockpit, which were just fine for making straight edge trim for the panels.

They were, of course, too thick to bend the corners, so I used my saw to cut the required rounded trim pieces from some of the other teak remnants.

All the trim parts had to be drilled and bored, then screwed and glued to the edges of the three boards.

Then all 75 holes had to be closed and sanded.

I decided to add fixed bumpers to the center part because things are constantly placed there that can slip off as soon as the boat starts to swing, even in the yacht harbor.

To do this, I cut the required strips to length, made beveled and rounded tops on them, and then formed the ends in a graceful bend to attach to the corner trim. 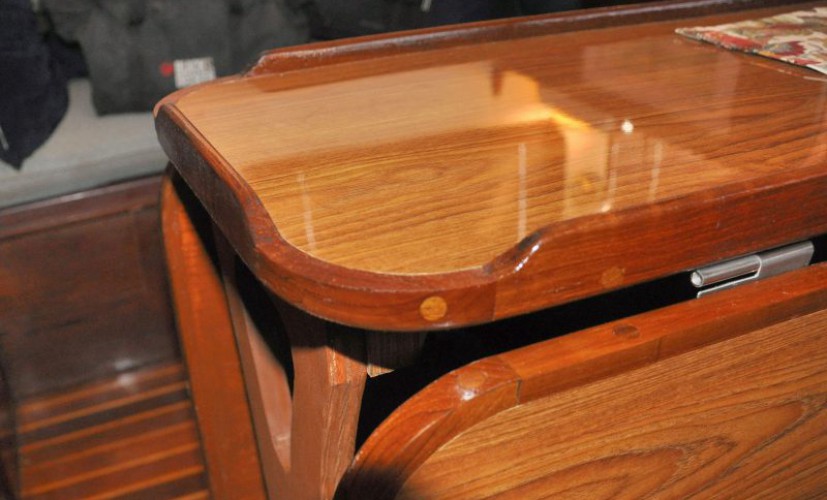 I left the corners open to make it easier to wipe the table. Finally, I rounded these parts as well.

To finish off, I also rounded the bottom of the decorative pieces flush, leaving the top square.

An unusual challenge that I didn’t expect was seeing all the trim details after they had been shaped and fitted to the desired edges and corners.

I made 12 corner shapes, four edge strips for the curved collar and eight other edge strips.

They were all slightly different from each other, because my new table is nothing more than handmade. Lesson learned.

Putting it all together

After making the side flaps, I hung them on the center section using half a dozen stainless steel sliding hinges - three per sheet.

It also makes it easy to separate the leaves from the center section when needed, for example when I need access to the floorboards.

The mainmast compression strut on my schooner is a 4-square-inch compression post that runs through the saloon to the keel, thus providing ideal support for the aft center section of the table. 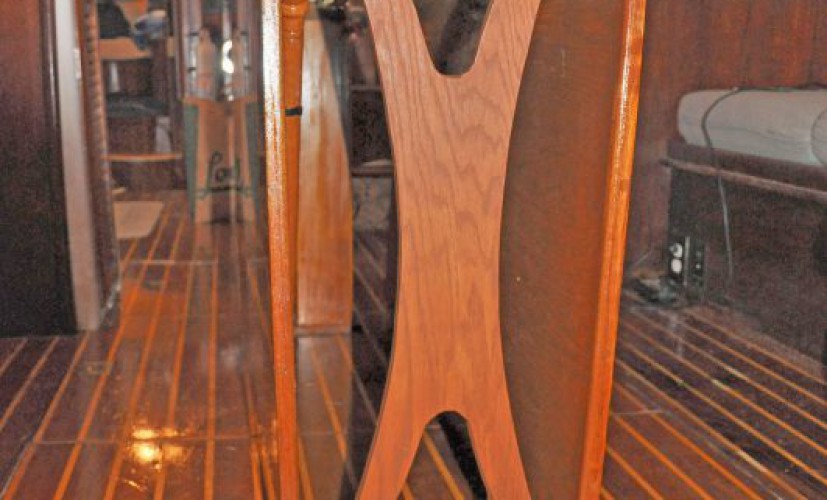 I used a 4 '' brass butt joint to connect them by screwing one half of the hinge to the compression rack with a teak block spacer and the other half to the underside of the table.

This allows the center section to swing upwards where I can use a strap to hang it from the deck beam so it doesn't get in the way.

I can also remove the table completely by simply knocking out the hinge pin.

To support the other end of the table, I made a leg out of plywood, which I then attached to the table using a short piano hinge and a spring clip.

This allows the leg to fold flat towards the underside of the center section of the table when the latter swings up and out of the way.

I have placed two pins at the bottom of the support that fit into a pair of flange bushings in the outsole.

I made the dowels by screwing 1/4 '' stainless steel screws into the base of the post, then sawing off the heads and filing them round.

The top of the legs was attached to the bottom center edge of the flaps with a small brass hinge, so when not in use they fold against the flaps where they are held securely with a plastic C-clip.

I also screwed a few 1/4 '' dowels into the base of each foot, which fall into another set of bronze bushings sunk into the sole.

This provides simple yet secure support for the table flaps - a position that is much stronger than trying to support them from the center section as I've seen on other boats, an arrangement that almost always allows the flaps to sag.

I also bought two brass barrel bolt latches from Walmart for $ 2 each, which I screwed to each sash.

Both bolts fall into flange hubs installed in the outsole to prevent the flaps from swinging in the folded position when the boat is underway.

Finally, I painted the white plywood on the underside of the panels and on the table legs with teak stain, which, when wiped down with a rag, makes the wood look stunningly like real teak.

The stain I used (I bought it from my local hardware store for $ 15 a quart) is made by Zar (ugl.com) and is called Teak Natural 120.

After that I applied Epifanes glossy wood varnish on all a couple of coats. Nowadays, it is difficult to distinguish real teak from laminate.

With both doors extended, my new desk now looks positively baronial, with enough room for six, and even a few more. 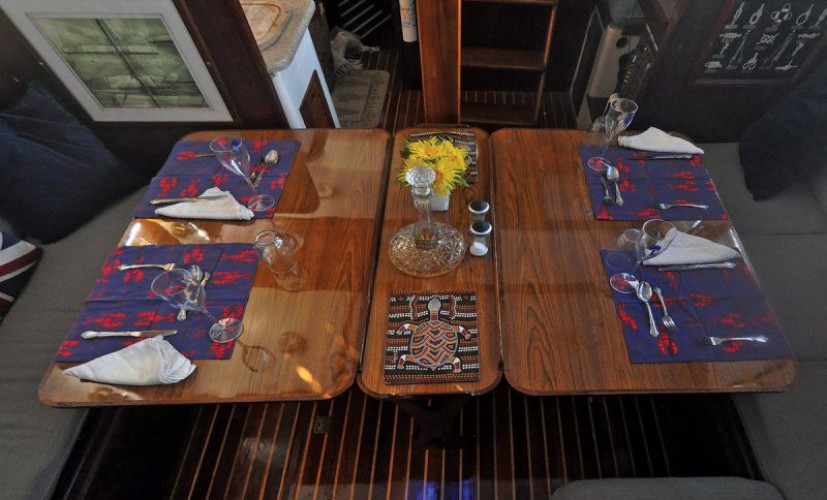 However, when the flaps are lowered, the table is smaller than the original and allows access from all sides. 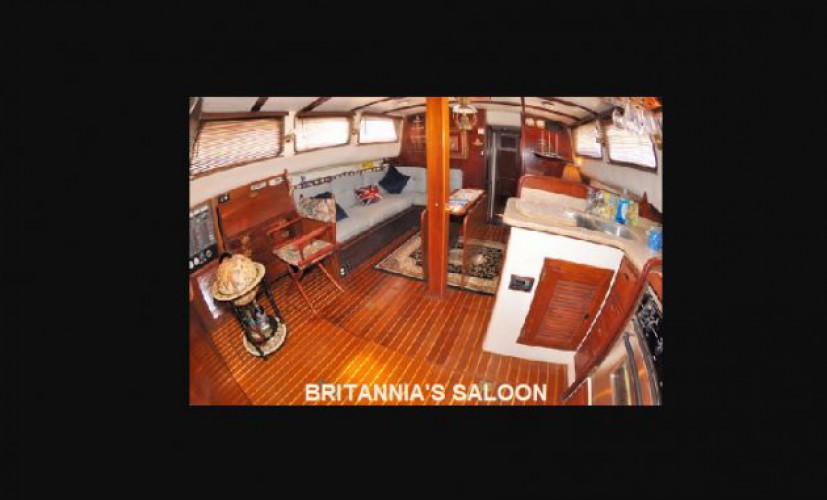 A significant improvement by any measure! 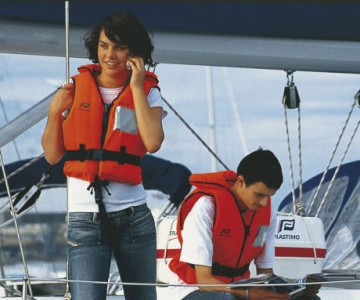 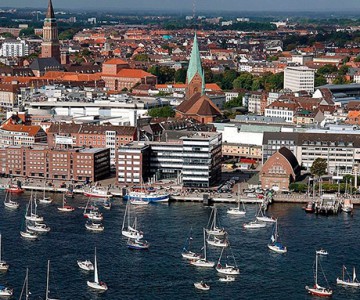