How useful is an aerobatic drone for the average sailor? Testing Raymarine Axiom UAV and Clear Cruise Augmented Reality to find out!

A thick fog hangs over the Solent, enough to hide Osborne House lurking on the shores of the Isles of Wight. A lone Raymarine drone is flying high in the sky.

Queen Victoria said that it is impossible to imagine a more beautiful place, and right now "imagine" is all we can do.

The engine runs and responds with a resounding roar in the ears.

The hum grows louder, and suddenly the gray sea on the tablet screen turns into a motorcycle cruiser from a bird's eye view.

These are the testers on the flybridge of the Raymariner, which has a vast collection of scanners, domes and cameras.

Above them is a drone operated not by the skipper, but by the new Raymarine Axiom UAV (Unmanned Aerial Vehicle) application that runs on the MFD.

Dan then enters a waypoint - just a red channel marker. The drone disappears into the fog, and we look at a screen showing the water ahead.

“Drones usually use their internal GPS to mark homes. In our system, they use the boat's GPS to update the home position. "

The UAV app is the latest update to the Raymarine LightHouse 3.6 operating system and is compatible with the DJI MavicPro drone.

With the app, you can automate a variety of tasks.

“The response to the app has been interesting,” says Harry. “Some skippers consider this a vain project. The rest are really intrigued. We are in talks with the US Coast Guard to integrate this service into search and rescue services. ”

The drone app has also proven popular with fishermen as a “virtual tuna tower”.

When equipped with a polarized lens, the camera can see game, bait, seaweed strips and more, allowing small vessels to access technology that was previously limited to commercial vessels.

We watch a red channel marker appear on the screen. A yacht is not far off.

While it would be tempting to send a drone and look inside the cockpit, it would be illegal; any drone capable of surveillance cannot fly within 50 meters of a vessel outside your control.

After 20 minutes, the battery needs to be recharged and Dan presses back to the boat.

Step away, warns his colleague Aaron, reaching out and catching the drone with the dexterity of a falconer.

Back in the salon, travelers are greeted with a holiday of the Axiom family. Augmented reality Clear Cruise is included.

The eight test screens display everything from chartplotters to radars, sonars, thermal imagers and video.

While Dan is driving the boat, I stay at the bottom, mixing and matching applications, overlaying maps with tide, AIS and waypoints.

It's amazing how the controls can be so adaptable - zoom with your finger or the dial; touch screen or keyboard.

Both have their own advantages depending on the movement of the boat. Raymarine screens start at 7 "and go up to 22", but you can also use Bluetooth to stream them to a separate display like a tablet or laptop - or even a smartphone!

When she can't figure out all this, she simply presses the Hide Static Targets button, and you look again at what the brain can digest - only at the moving ships.

In split-screen mode, a red triangle appears on the chartplotter.

Red means "danger"; the ship is heading for a collision course.

Thanks to the AIS overlay, touch the triangle and the drop-down menu will show that it is a vessel called the Red Osprey.

The gaze is transferred to the right screen, which displays a video stream of our course with a compass in real time.

It's like driving on the road on a GPS navigator, only with real footage.

Now you can see where the ferry actually is. An instinctive desire to look out the window to see what I see on the screen. Alas, the ferry is just a faint spot on the horizon.

With a chartplotter and augmented reality video, a boat can be spotted that my eyes could barely make out.

Make the ferry a “buddy” in the app to keep track of its course.

Dan changes course, and the direction of the compass and video changes with him. The triangle is now safe "green".

The video cameras displaying our course are fixed in one direction.

However, Raymarine is working on a version with PTZ cameras so you can see the water 360 °.

While the drone was limited to a 20-minute battery life and a 50-meter distance from other vessels, the benefits for SAR and fishing applications are definitely visible.

For the average yachtsman, this is a fun and exciting thing, but by no means a necessary navigation tool.

AR, on the other hand, has actually proven useful beyond just overlaying the chartplotter with AIS.

While covert surveillance may not be a priority for boaters, the advantage of such technology at night and in MOB situations is clear.

There seems to be no limit to the technology available to boat lovers today. From AR and UAVs to thermal technologies and applications.

But I wonder what was the most exciting event in the last decade?

“Moving from Linux PC to Android,” says Harry. “This paved the way for a number of innovations. Initially, the software needed to be developed from scratch, but now, thanks to feedback from shipbuilders and the public, we can very quickly integrate third-party applications such as Fair Weather and Seakeeper. "

There's even Spotify and Netflix on the MFD home screen. So after a busy day of conspiracy and drone flying, you can always drop the hook and watch The Crown voraciously. 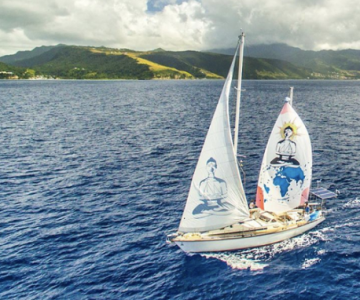 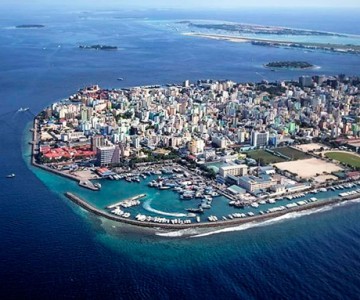 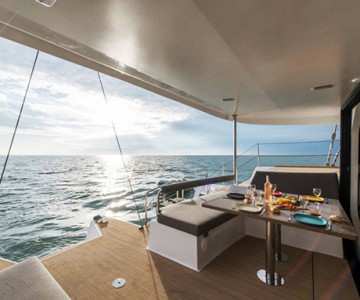 The Neel 51 trimaran is officially recognized as the most "awarded" cruising trimaran in the history of multihull yachts!