French yacht builder Dufour Yachts has carved out a niche with stylish and sporty sailboats in the 30 'and 40' range. These boats attract sailors who value performance as well as quality engineering. Dufour boats are designed from the outside, not from the inside - a concept that is the opposite of many manufacturers competing with Dufour Yachts. Just a couple of minutes at the helm of one of Dufour's yachts, and you will appreciate the emphasis the shipyard has placed on performance for the perfect sailing experience! 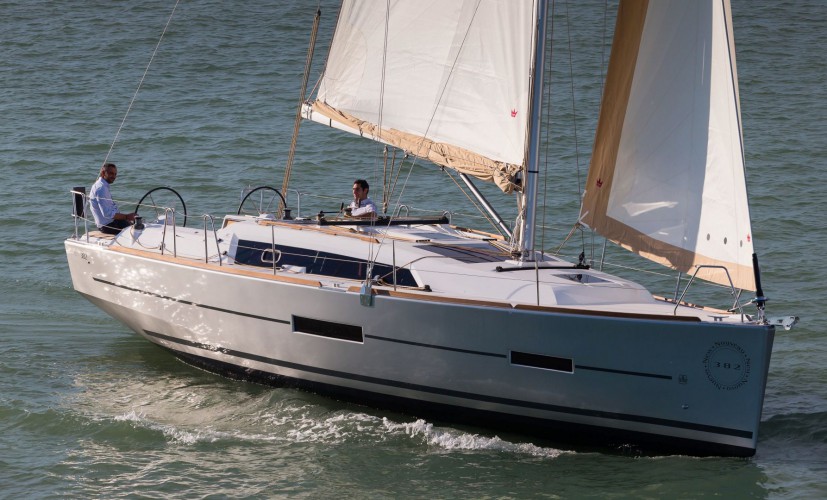 New Dufour 382 took a place at the heart of the cruise line Grand large and offers yachtsmen the opportunity to travel comfortably with family or friends, but still with easy handling for a couple or even alone. This model has already achieved success in European boat shows and has become very popular in the charter industry.

This yacht, as well as other models of the cruise and exclusive line Dufour were developed in collaboration with Felci Yacht Design, a bureau that has been winning awards in the yachting industry for over 10 years. Versatility Dufour 382 Grand Large is also demonstrated by its internal options. The interior layout includes at least six different interior configurations, with the main options being two or three cabins, one or two bathrooms, and a straight galley or L-shaped galley. 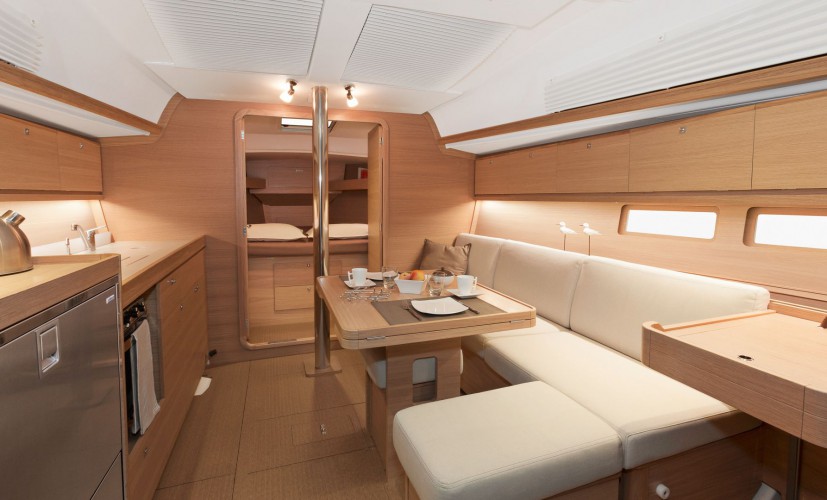 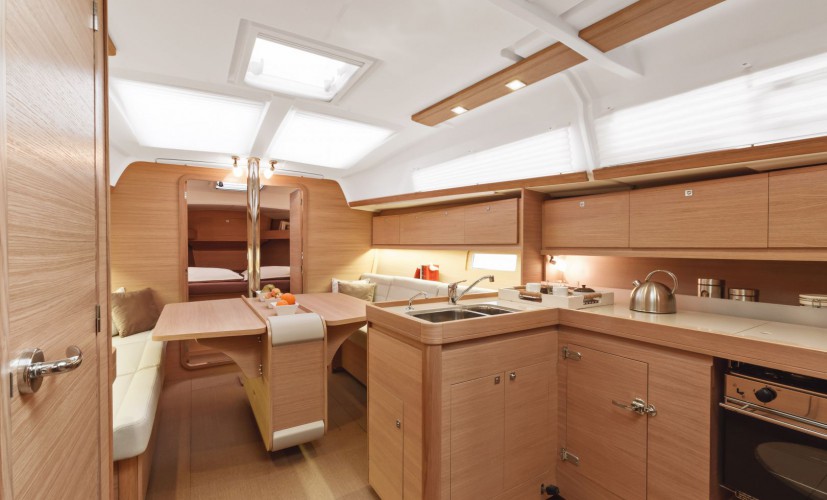 Robust case, hand-laminated, constructed from fiberglass, and the main structures are vacuum-infused using a structural mesh on the inside of the case for durability. Two keel lengths available, both with an L-shaped bulb, with a strong semi-elliptical rudder, which is filled with foam in closed cells, and is suspended from a solid stainless steel structure. The overall mantra here is to save weight wherever possible without sacrificing strength and durability.

The boat under test has an optional sailing equipment, which is 0.7 meters higher than the standard armament. On the mast Z-Spars split backstay and shrouds are provided that lead to the far outer edge of the deck. The improved armament features upgraded sails, a larger overlapped staysail and a comfortable lazy jack system. The boat was also fitted with an optional bowsprit to keep the asymmetrical cruising spinnaker out of the forehead.

Standard cruise jib for Dufour 382 Is a 95% sail with an automatic control system, which is very convenient for singles, but at the same time does not provide the performance for traditional jib tuning. Jib sheets on test boat, passing through clamps on coamings to main winches Lewmar 40located directly in front of the two helms, and have adjustable carriages with control ropes that return to the cockpit. Curiously, although the test boat is equipped with electronics for a two-way German boom-sheet system with a runner directly in front of the gangway, it is configured to restrict the boom-sheet in the clamps on the roof of the saloon, where two more winches are located. Lewmar 40, one on each side. 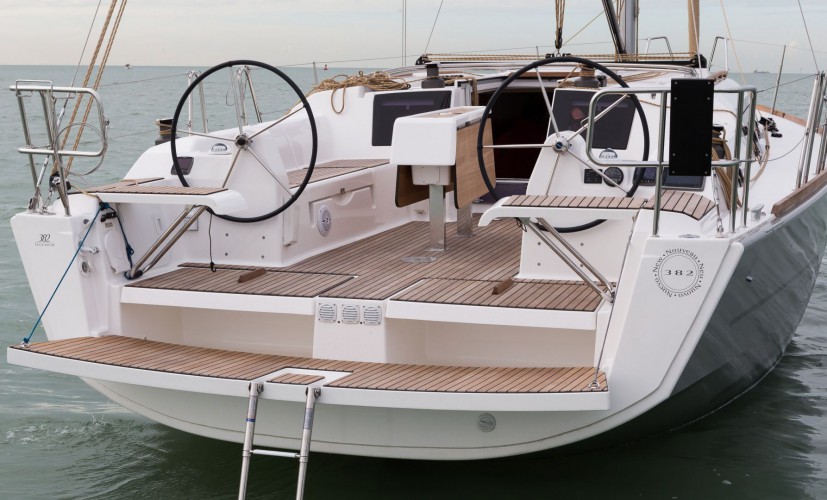 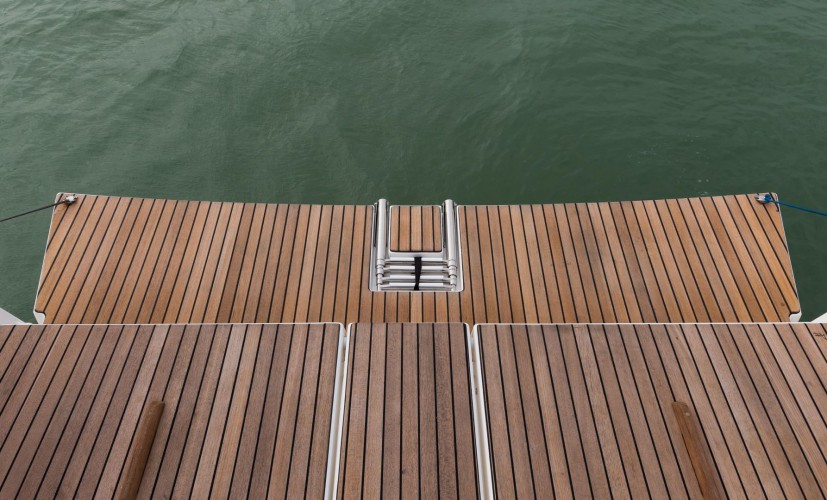 Steering is provided by two steering wheelslocated in the aft corners of the cockpit. This gives the skipper an excellent view to the front and to the sails, especially when seated at the helm station. On the boat under test, there is a compass and chartplotter at each helm B&G, with engine controls located on the starboard side. The wide helm spacing allows easy access to the transom, which is raised and lowered using a simple block system rather than a hydraulic system. When lowered, the transom becomes a large usable cockpit area and serves as a stable and functional bathing platform. In addition, the transom has a compartment for a propane container and a storage cabinet for a life raft. 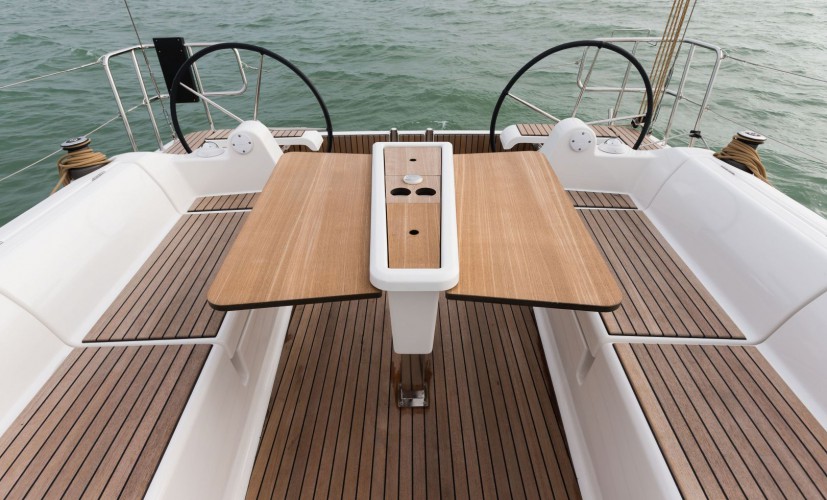 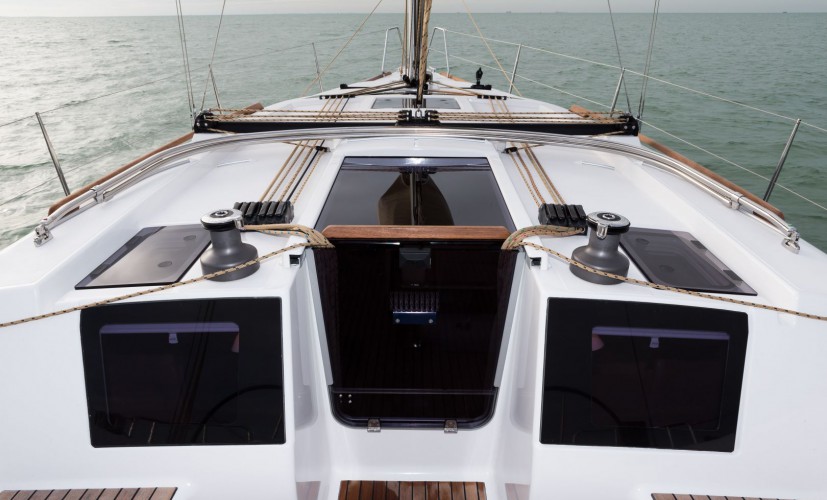 Cockpit there are two benches, each with lockers. Since the boat is in a three-cabin version, the lockers are quite shallow but wide enough to be useful for storing some items on deck. Cockpit divided by a folding table and provides a comfortable space both on the move and in the anchorage. Moderate amount of teak on deck is tasteful - teak floor and cockpit seating surfaces, teak deck handrails and sides. In this regard, the boat is quite safe, with non-slip surfaces and an adequate number of handrails on the deck. A split roller is installed on the bow deck, which provides easy access to the bowsprit, and allows the staysail to glide freely, and the large anchor locker is equipped with an electric windlass. 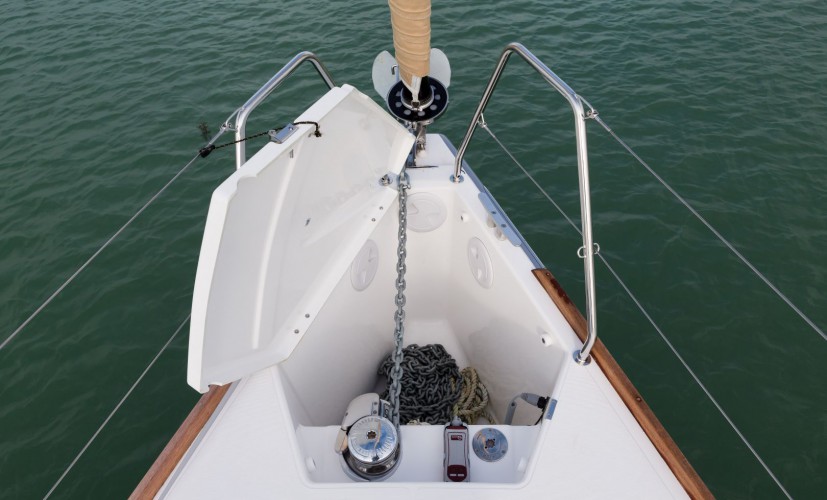 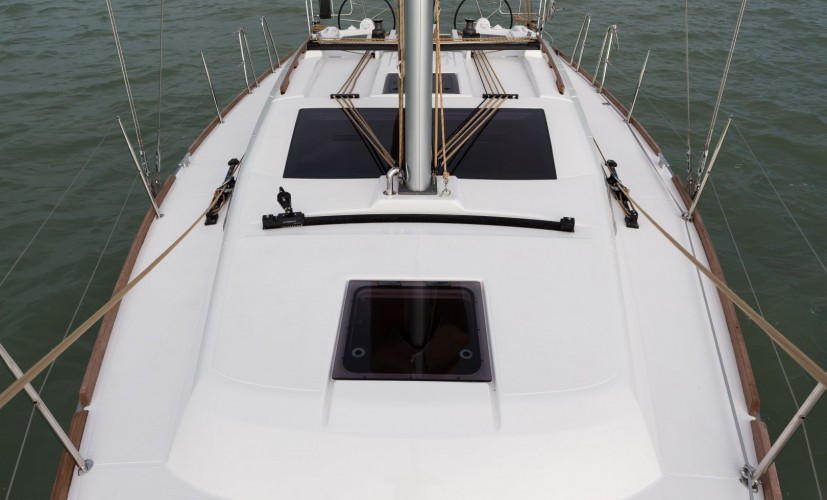 Below deck Dufour 382, the interior is finished in light oak, with plenty of handrails, as well as portholes and hatches both above and at eye level, through which a huge amount of light enters. Particularly impressive are the two large hatches above the folding table in the saloon, which provide an unrealistic feeling of open space. In the cabin there is also an L-shaped sofa on the starboard side, which has a movable seat that converts an L into an I, and also converts into a double bed when needed. The cabin has plenty of storage space for various things that are needed on a cruise, both above and below the sofas.

In front of the cabin through unique double doors that visually enlarge the space, the main cabin is located. Here you will find a V-shaped double bed, hatches and hanging cabinets on each side, as well as storage in drawers and compartments under the mattress. 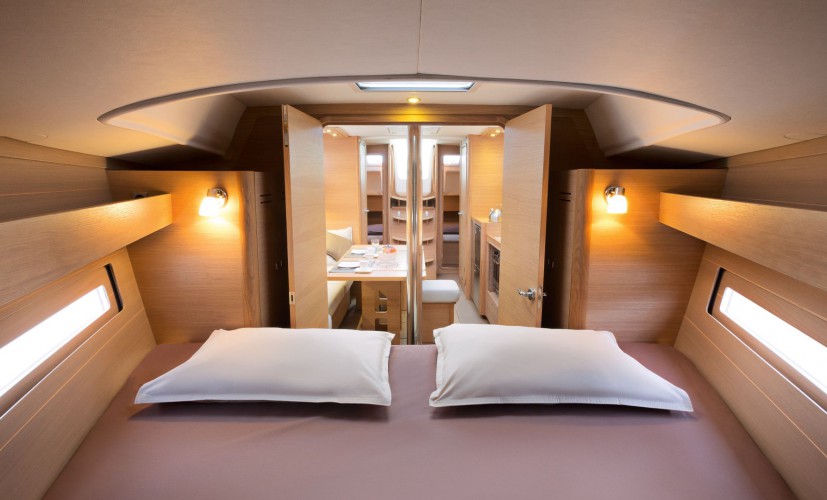 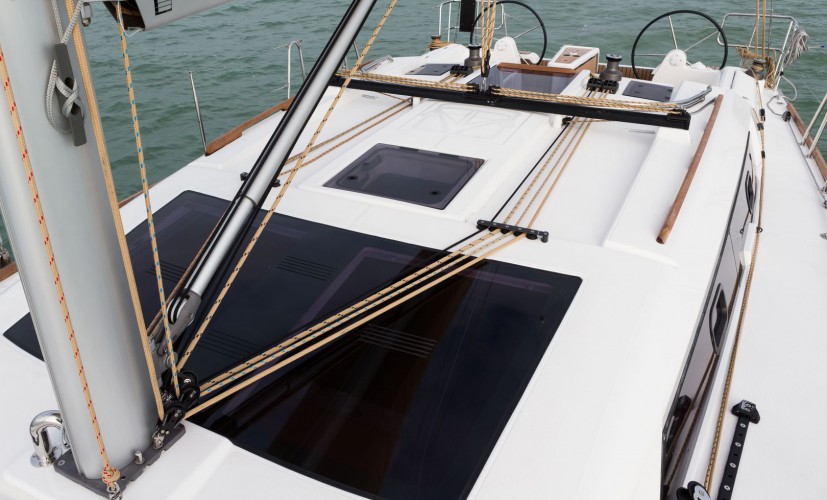 There are two double cabins aft, each of which is almost identical in characteristics, with the exception of an additional storage box in the cabin on the starboard side. Storage space in these fairly spacious cabins is somewhat limited, with no storage under the mattresses, only small hanging lockers, but that should be ample for a local cruise.

Well equipped galley located on the starboard side of the gangway and is equipped with two refrigerators, a fresh water pump, a two-burner stove, an oven, and a microwave oven. One of the clever features here is the sink lid, which serves as a slicing board that allows the crumbs to fall into the sink.

Bathroom located on the port side of the companionway, closer to the stern in front of the small chart table. The layout of the bathroom is very functional, and the sink is of a comfortable size for use. Two-cabin version Dufour 382 naturally more spacious, and does not require compromises with storage space, and also makes it possible to install a separate shower room.

It is impossible not to mention wine Vaultlocated under the floorboards at the foot of the companionway, which is in addition to the storage of bottles in the galley and saloon, also in specially designed places for this. This is a feature available on all yachts. Dufour, and is a classic example of French sensibility and attention to lifestyle. 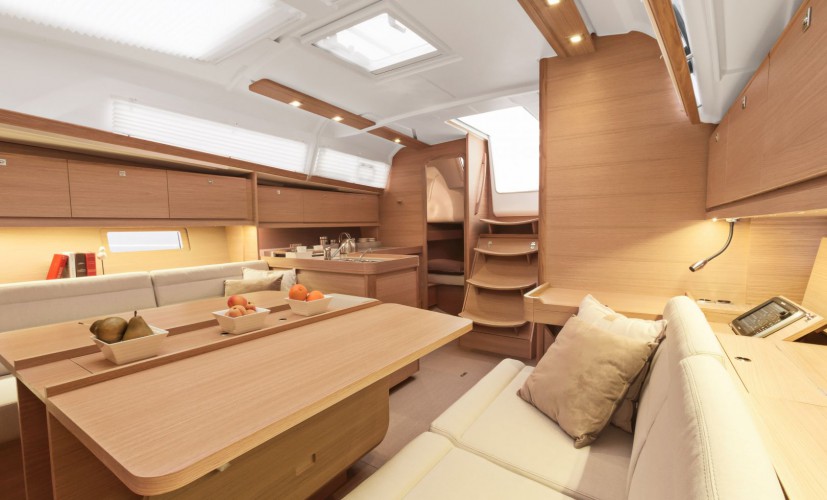 In general, the interior and decoration Dufour 382 modern and durable with no squeaks or creaks, even on bamboo floorboards - and that's more than can usually be said for many sailing yachts on the market. Interior Dufour 382 can be described as cleaner, more functional, and more comfortable than avant-garde or overly immersive, and this matches well the impeccable performance and safety on board, which, in fact, is famous for Dufour yachts.

As for the engine, the boat under test is equipped with Volvo Penta 40 hp, the more powerful engine of the two available options. In fact, this is more than enough for a boat of this size, so you can safely save some money by ordering a 30 hp engine, absolutely without sacrificing performance. This boat also features a high performance alternator, two-blade fixed propeller and optional heater.

Test drive Dufour 382 took place not far from Falls Creek in Vancouver, and the boat was sailing at 5.5 knots at 1800 rpm and a comfortable and effective cruising speed of about 2600 rpm at 7.2 knots. The engine noise was very reasonable and allowed for easy conversation both on deck and in the saloon thanks to the well-insulated engine compartment. When you set sail and turn off the engine, Dufour 382 shows all its brilliance. Although sailing conditions were in the lower range of what typically happens during a cruise, around 5-10 knots, this boat runs like clockwork on the water, both upwind and upwind. 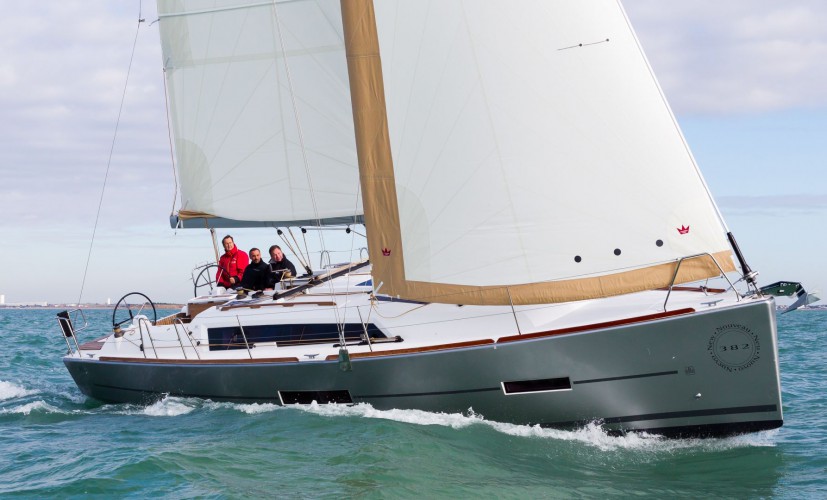 Since the boat under test was equipped with a cruise spinnaker and we were sailing downwind, it did not take long to adjust the kite. The performance with a kite at 6-7 knots of true wind speed at 130-140 degrees, made it possible to comfortably reach 4.5 knots of boat speed. The turn of the fordewind was carried out easily by a team of three, and the spinnaker descended as easily as it climbed. Heading upwind, at 5 to 6 knots of wind, we made 4 to 5 knots of boat speed. As the wind increased to 10 knots, we hardened into a steep sidewind and the boat climbed to 6 knots - very respectable speeds for any cruise boat in the 35 to 45 ft range.

The feeling at the helm is extremely positive at all stages of sailing during the test, and the boat went smoothly and beautifully through light excitement in English Gulf... If our team were on a cruise on Gulf Islands on board Dufour 382 on a sunny summer day, we would not hesitate to hoist the sails in the lightest conditions.

For boaters looking for a mid-sized cruiser who value exceptional sailing performance, style throughout, and solid engineering on board, it will be difficult to find a boat better than the Dufour 382 Grand Large. And at a good price, it represents good value for a boat that will provide endless hours of yachting pleasure! 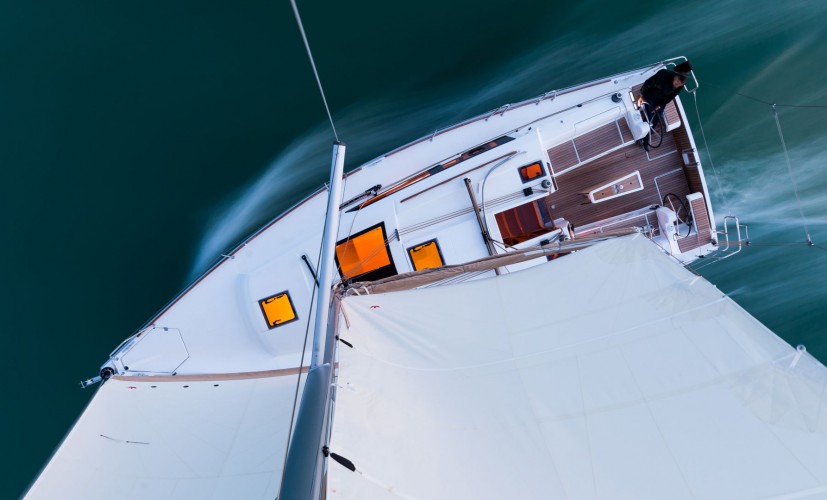 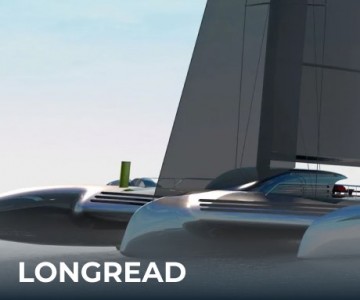 Multihulls: how multihulls conquer the industry

In 2022, it became clear that the era of multihull superyachts had finally arrived. Demand for catamarans among mid-budget buyers has also increased. We will tell and show new interesting catamarans! 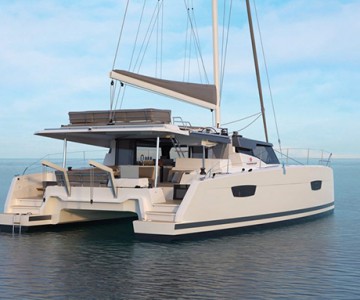 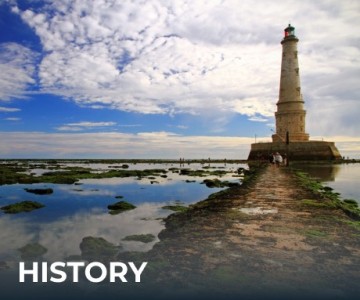 9 lighthouses in Europe that you must visit

Lighthouses have always been covered with a certain veil of romance. They have been accompanying sailors since time immemorial - bright lights have guided, protected and given hope. We have chosen 9 lighthouses in Europe, which you need to look at at least with one eye!