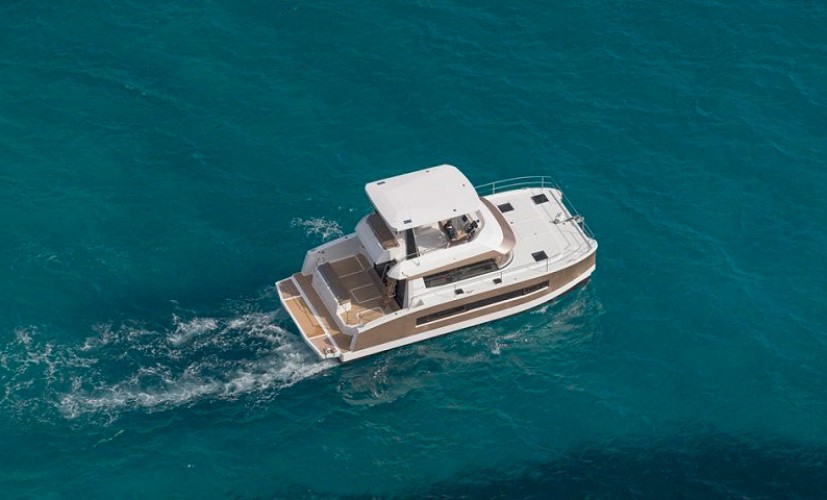 Fountaine pajot have always believed in power catamarans, so they radically revised their range, keeping the key principles: design 100% powerboats with powerful engines, not alterations from sailboats.  Fountaine Pajot sailing catamarans have kept their beautiful names, but the range of motor catamarans stands for a clear cut from Motor Yacht.

Some manufacturers simply remove the rig from the existing catamaran and change the hull lines to be able to carry more load, thanks to slightly more powerful engines, but Fountaine pajot manufactures models that were originally designed as motorboats and only... It is also noteworthy that these catamarans are taller and narrower. Thus, in some way they are closer to the traditional motor yachts with which they are in direct competition. 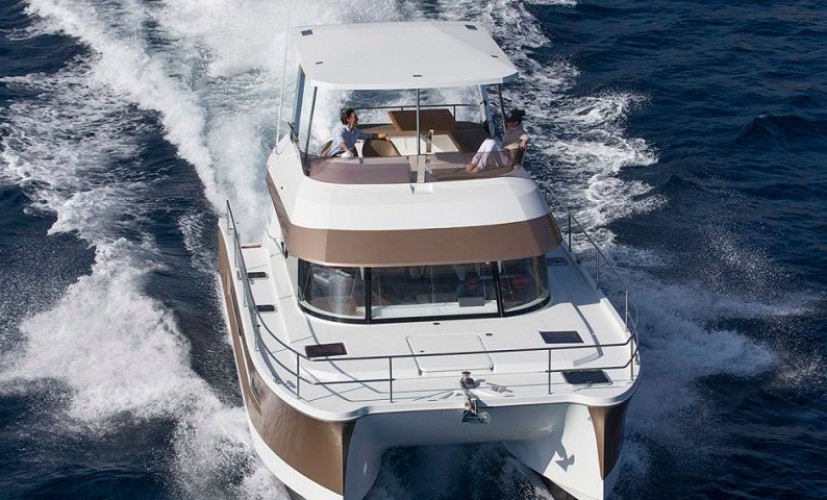 Concerning engines, MY 37 offers 2 x 150 HP or 2 x 220 HP, compared to the Lagoon 40 MY with only 2 x 75 hp, the Nautitech Power 40 with 2 x 40 hp. or the optional 2 x 55 hp, and the Bali 4.3 MY which reaches a maximum of 2 x 160 hp. This means being able to maintain a higher cruising speed. And you don't have to consume more fuel at the same speed, contrary to many expectations: at a speed of 7 knots, each engine, large or small, uses about 5 liters of fuel per hour. Two 220 hp engines provide a comfortable cruising speed of up to 15 knots. And also the stock of maneuverability in the marina.

Fountaine Pajot MY 37 is higher above the water than its competitors - the average freeboard is 91 cm, but more importantly, it is narrower - 5.10 meters, in contrast to the Lagoon 40 MY - 6.79 meters. The hulls are narrower at the waterline, and taller above it, giving more space inside. The few tens of centimeters, which can reduce your costs in the marina and give a neat aesthetic, are enhanced with the colors: white for the lower hull, bronze for the upper hulls, hatches in black, and then another bronze layer on the deckhouse roof. All this gives the MY 37 an elegant and modern look.

Design team led by Daniel Andrieu designed slender noses that protrude forward above the waterline to become a sill that extends around each hull. This results in a reduction in wet area to reduce footprint - and therefore the amount of energy required to drive - but equally effectively repels splashes. 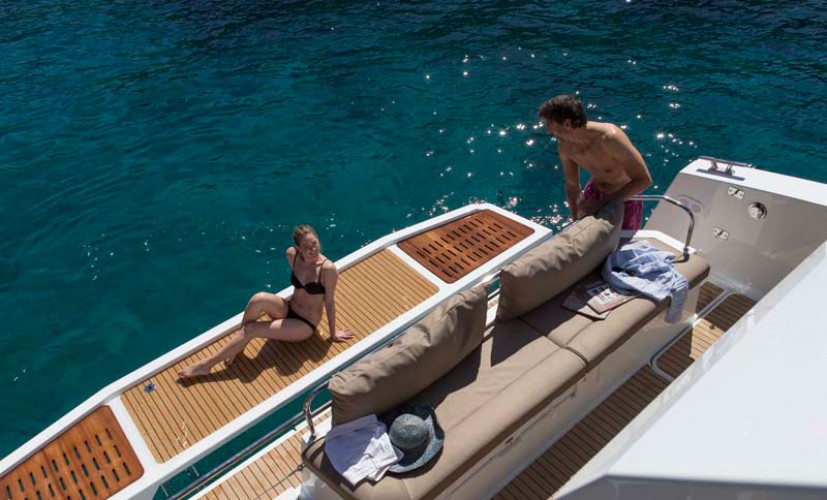 MY 37 is also equipped with short keels which provide a draft of just 80 cm to maintain a little control when slowly maneuvering into gulfwind. This is important because MY has quite a lot of resistance, especially with a hardtop.

The engines are not very far apart, so perhaps the shipyard-designed bow thruster option isn't such a bad idea in busy marinas. The helmsman, on the flybridge, generally enjoys a great view.

Test drive in Porquerolles in France, MY 37 met a cold 25-knot mistral and rough seas. The test boat had optional 220hp engines over the standard 150s, and the shaft drives were connected to four-blade propellers. At full throttle (4000 rpm), the 37th pretty much reached its theoretical top speed of 20 knots. The boat was willingly pumped over the waves, but remained under steering control, despite the strong wave. 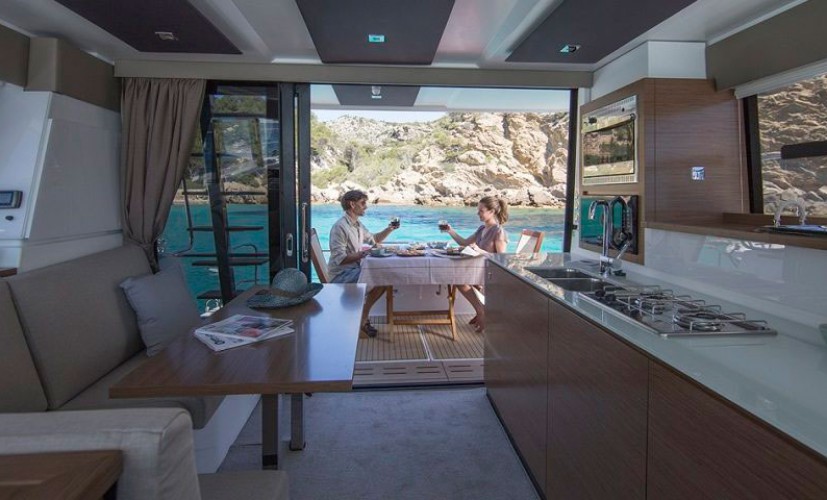 When the boat is anchored, all it took was the remote control of the winch to lower the anchor and the thirty-meter chain. 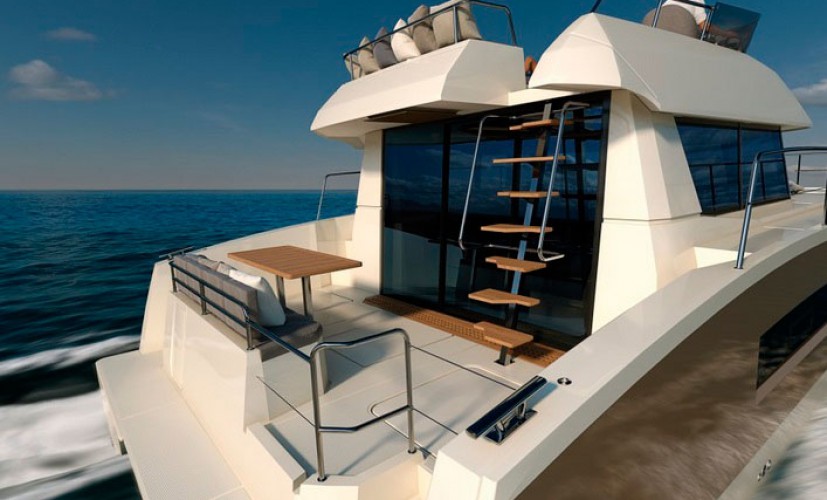 As for the outside seating areas, then behind the roof of the wheelhouse, the deck extends almost to the bow, and the side decks are narrower than those of sailing catamarans, but still very comfortable. The second seating area is a traditional cockpit with a table that seats six guests and a seating area aft. The flybridge is accessed via a fairly steep staircase, and upstairs, in addition to the helm station and two seats, there is a table, refrigerator and a large terrace.

The interior layout is amazing and it is possible to choose a version with three or four cabins. The cabins are very spacious with plenty of natural light, panoramic views and ventilation. The 1.60 meter wide aft guest cabins are particularly comfortable, and all cabins are 1.91 meters high. The doorway is wide, with a margin of almost two meters, creating an amazing impression of volume. A fully equipped galley and dining area are located to starboard with an internal helm station in front. The space is comparable to a 50ft motor yacht. Plenty of storage is thought out throughout, including three below deck lockers that open with a smart suction pad, even the helmsman's seat lifts up to provide even more storage space. 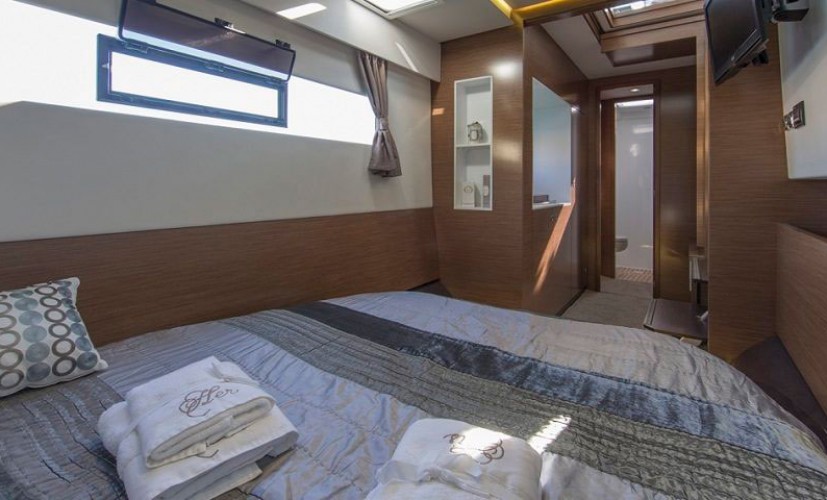 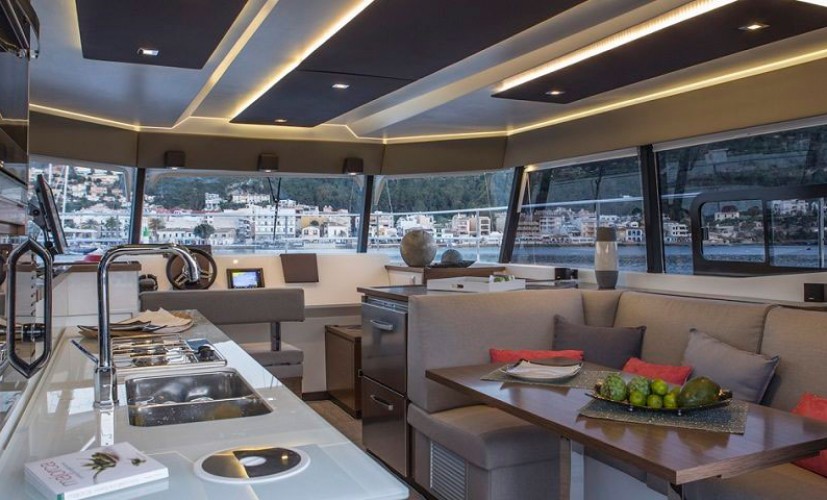 Fountaine pajot Is a shipyard that had the courage to design a truly correct and high-quality motor catamaran, which has already received recognition and delight from customers. Without a doubt, this is the best grade any shipyard could wish for! 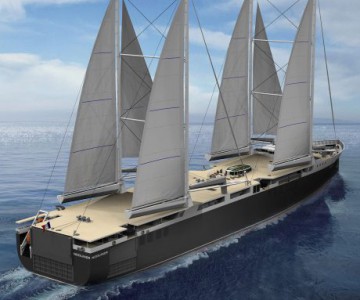 Michelin tires will be transported under sail

Michelin Group signed a letter of guarantee for sea transportation with the French shipowner NEOLINE, a leading specialist in the field of sailing shipbuilding 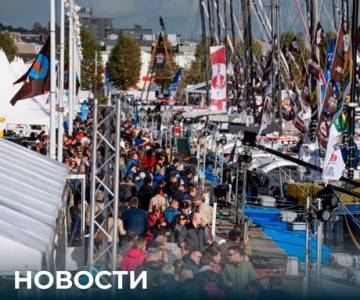 TRANSAT JACQUES VABRE: HOW MUCH RACES ARE PROFITABLE FOR CITIES? PART 2

More recently, we have covered the impact of racing on the economy and development of yacht racing host cities. The closest example was the Transat Jacques Vabre race. The race has already ended and you can talk in more detail about how the race influenced a particular city. The main character of the previous part - Regis Debons, Deputy Mayor of Le Havre - share his thoughts. 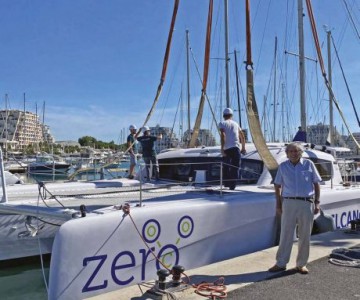 Jimmy Cornell announces his new catamaran, which he plans to sail around the world without fossil fuels