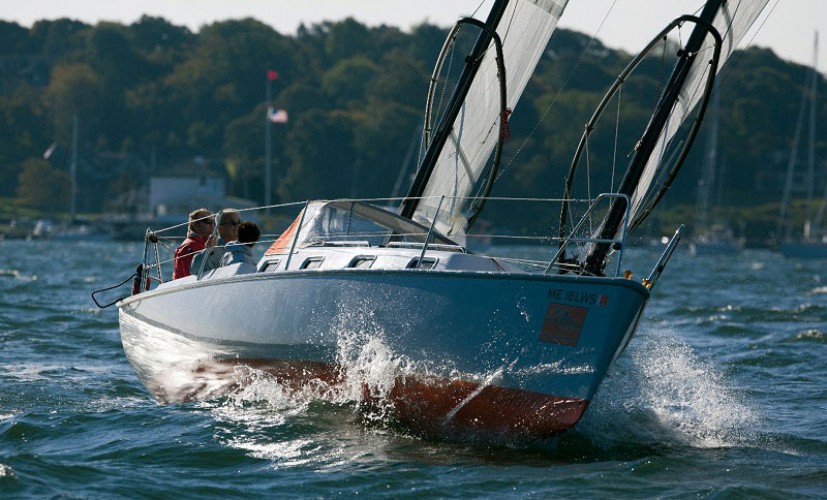 If you look at the Presto 30 as a modern cruise yacht, then everything is unusual in it!

First of all, its width is striking, which is at least a meter less than that of boats of this size, which are usual for all boats. But it can be transported on a trailer! And the rule "length runs" has not been canceled either. 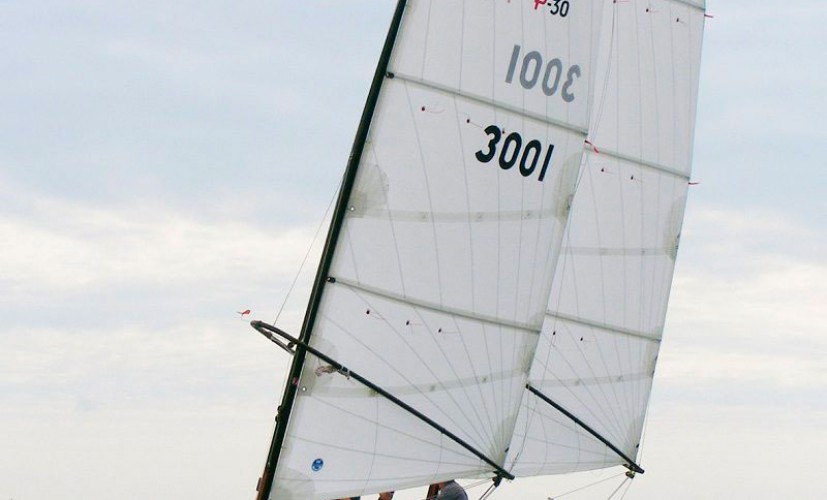 The sailing equipment of the schooner is also unusual. But it is unusual only for the modern yachtsman. But 100-150 years ago, almost the entire small fishing fleet of North America had such weapons. Then no one would be surprised to see a schooner with masts without standing rigging. Two options of armament are offered: triangular sails without armor (30 sq. M) and a variant with a square top (37 sq. M). The latter are not only larger in area, but also have a better profile due to the presence of through battens. They make cat-cach out of the schooner, tk. in this version the head sail is slightly larger.

Of course, the mast Presto 30 made with an eye to modern technology - free-standing masts and booms-wishbones are not made of solid wood, but of carbon-plastic. Such armament simplifies control and reduces the heeling moment, because the center of sail, with the same area, is lower than that of the sloop. Lightweight wishbones, being at a sufficient height, make it safe to turn fordewind in a fresh breeze. Tacking does not require any intervention in setting the sails at all!

A folding lightweight centerboard and rudder blade, coupled with a shallow draft of the hull, allow you to come close to the shore and not be afraid of shoals. All ballast is placed on the bottom, so the restoring moment is practically independent of the centerboard position. And the ability to change the position of the centerboard becomes an additional opportunity to change the balance of the boat, which is very important in a fresh wind on a passing course.

The deck area is small, as for a nine-meter boat. However, it is not cluttered with standing rigging. This circumstance can play a cruel joke with a person who, when moving, is accustomed to grabbing onto various kinds of cables. There are small depressions along the edges of the wheelhouse, and on the wheelhouse itself there are handrails for safe movement to the tank and back. An anchor box is arranged in the nose.

The spacious cockpit, 3.2 m long, is bounded by coamings along the sides. It houses a right-sided outboard well, convenient cans and a reclining step for swimming on the transom. One of the walls of the well is a power element that carries the glass of the mainmast and receives the efforts from it. There are capacious lockers in the coffins. Due to the mainmast, standing close to the rear wall of the wheelhouse, the hatch of the cabin entrance is shifted to the left of the DP.

All running rigging is made without frills and does not have complicated and expensive elements. The halyards and topping bills are carried outside the masts, which simplifies their maintenance. There are rope loops under the booms, into which the folded sails fit.

Engine up to 10 HP suspended on a movable bracket, which can be moved vertically in the well with the help of simple rope hoists. The motor can be fully raised while sailing. In this case, the bottom will be closed with a special lid and flow well around. If it is necessary to go under the engine, it must be started and lowered to the lower position. The well is covered with a hood, which reduces engine noise. The placement of the propeller under the bottom practically completely excludes its aeration in waves.

The interior space is divided into two small cabins. The bow is separated from the stem by a collision bulkhead (the foremast glass is tied to it) and has two berths. In the wardroom there are two more sofas, a pull-out galley, an enclosed latrine and a wardrobe. The length of all sofas is 2 m. In the parking lot, the deckhouse ceiling above the entire area of the cabin rises to a height of 2 m from the floorboards, which allows you to stand at full height and provides excellent ventilation. 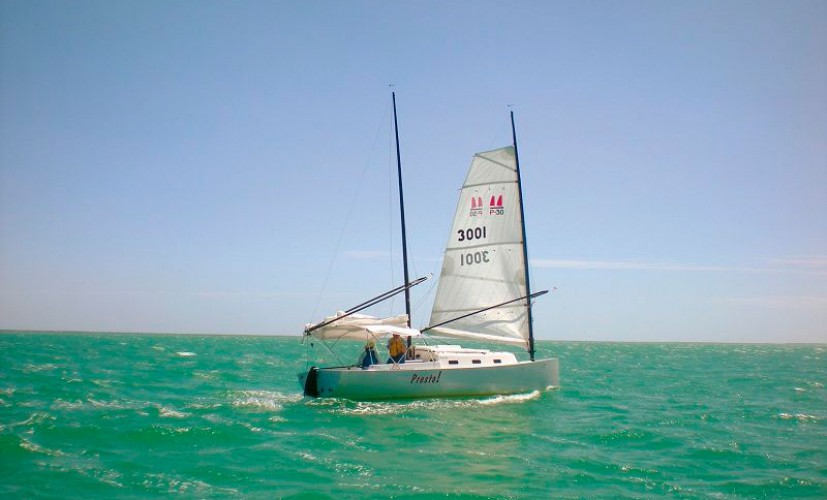 The low weight is achieved by the use of three-layer structures made of PVC foam and fiberglass based on vinyl ester resins in the hull, the absence of standing rigging and a carbon fiber spar. To get an idea of how light a boat it is, compare its weight to the Bavaria 30 Cruiser, for example. The latter weighs over 4 tons!

The boat can be transported on a trailer behind a car (it is in auto size) and lowered into the water on a slip. The masts weigh only 18 kg. She is armed with the forces of two people without the use of lifting mechanisms.

Due to the radial shape of the contours with a very sharp nasal tip and a large area of fins, Presto 30 good walker. A high and steep wave of shallow waters is literally pierced by such a hull, without causing strong blows. And a moderately wide transom does not pull water along. Such a body has a minimal wetted surface, which makes it fast in light winds.

It should be understood that the combination of a narrow waterline, internal ballast and a fairly developed windage does not give a very high initial stability. But this is compensated by the lower center of the sail and the higher speed of the boat in weak winds. You just need to take the reefs a little earlier. 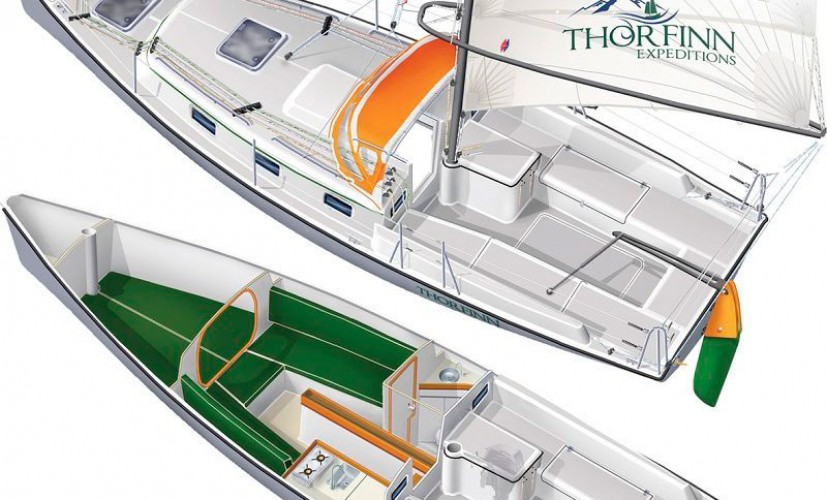 Thanks to the high freeboard and the developed superstructure, the positive stability of the hull is maintained up to a roll angle of 110 °, and if we take into account the useful buoyancy of hollow, sealed masts, then everything is 140 °!

Presto 30 Fast and beautiful sailing dinghy for a small family or group, easy to fly and ideal for shallow waters. And it is not surprising, because this is exactly what he thought about. He can be seen somewhere in the floodplains of the Dnieper reservoirs!

The boat is produced in New York by Solarwind and has the following dimensions: 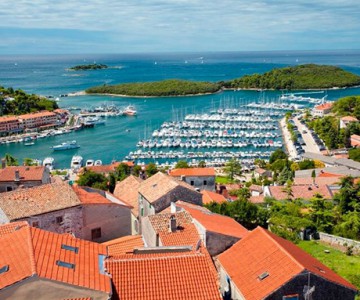 If the Dalmatian Islands have so many yachts that "there is nowhere for an apple to fall", then on the Istrian coast the atmosphere is much quieter. Take advantage of this great opportunity, as the largest peninsula in the Adriatic has a lot to offer. 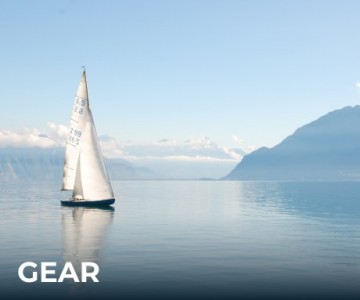 Three useful gadgets for your yacht

As boats come equipped with more features and systems every year, boat owners are looking for more convenient ways to manage all the equipment on board. If you often use the boat alone or with a small crew, it is especially important to have convenient and mobile control devices for various systems on board. 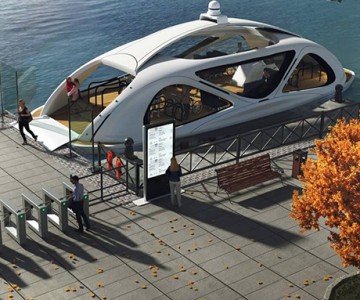 The Norwegian startup is promoting transport links with electric mini-ferries operated by autopilot.