German shipbuilder Uli Killer was looking for a sailing boat while working on a large restoration project when he spotted Andrillot, a 25-foot wooden boat for sale in Dartmouth, UK. 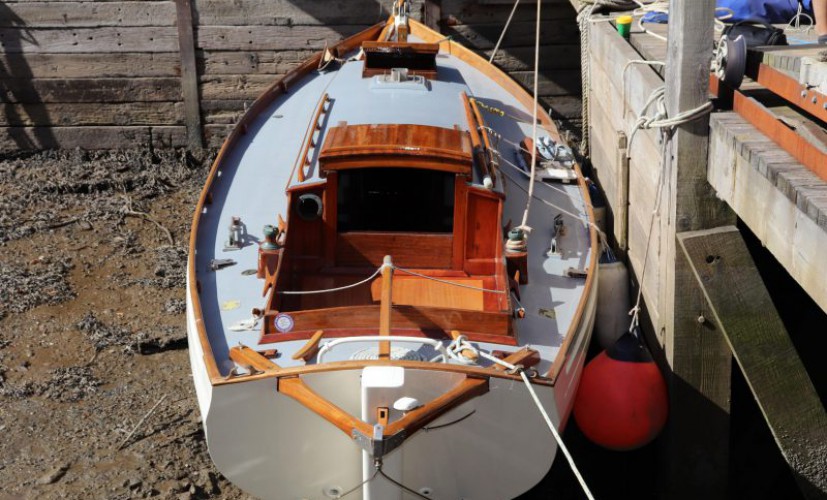 The boat has recently undergone a three-year restoration and is reported to be in very good condition for its age.

The advertisement stated that the yacht is "an important part of our maritime heritage" and that she and her sister ships "have become legends in themselves."

But for Uli, a relative newcomer to the classical world, she was just a beautiful boat at a reasonable price.

“She looked beautiful and was available to us. I didn't know anything about her story and I had to call a friend to ask him who Laurent Giles was! ”Keeler recalls.

“Then I saw articles in English and American magazines and realized that this is indeed a very famous boat. Hundreds of such boats have been built. But the fact that she is number 1 makes her more interesting. " 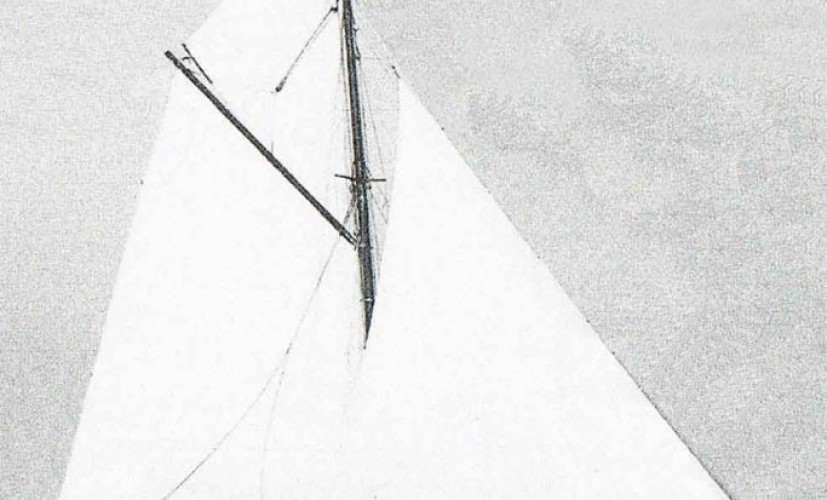 The boat that Uli stumbled upon was Andrillot, better known as the "original Vertue", the first boat of the class which, 85 years after launch, is still a success and currently has about 200 boats.

More accidentally than intentionally, Uli discovered a unique piece of maritime history that he was able to buy for less than the price of a new VW Golf. He couldn't believe his luck.

It was in 1935 when Guernsey's lawyer Dick Kinnersley commissioned a British yacht designer, Laurent Giles, who was just beginning his brilliant career, to design a cruise boat for him.

“I was an ignoramus in yacht design, but I knew what I wanted: a boat that would spin on a sixpence and I could fly it alone,” he told British journalist (and fellow Vertue owner) Adrian Morgan 60 years later. ... “I’m not against the transom,” I said, “and a good entrance. I couldn't afford an engine, so I needed a lot of air aft, which meant topsail. "

The result is a modest 25ft 3 "cruising yacht with a wide, distinctive fairing inspired by the yacht's origins and a controllable gaff (which some call the" pinnacle "of gaff design).

The hull shape was moderate in all respects, and Giles himself spoke of his achievement with restraint, saying: "There was nothing special about the first concept, just a modern interpretation of the Pilot Cutter theme with the same displacement and overall layouts reduced to a very small size."

The boat's capabilities were soon tested by Giles' colleague Humphrey Barton, who borrowed Andrillot shortly after it was launched and sent it from Leamington to Concarneau and back, covering 855 miles in 23 days. The voyage, which was hardly heard at the time on such a small boat, earned him the 1937 RCC Founders' Cup.

New orders for design soon began to come in, although, oddly enough, the class didn't get its name until 10 years after the launch of Andrillot. One of the boats built by Laurent Giles Design # 0015 (as it was then called) was the Epeneta, which won the Little Ship Club's 1939 Vertue Challenge Cup on a 745-mile English Channel cruise. When Giles began naming the class after the war, he chose the name Vertue in honor of this achievement.

Vertue's other epic journeys soon followed, including the famous transatlantic crossings. One, made by David Lewis on Cardinal Vertue, was performed during the first OSTAR in 1960. He finished third, behind Francis Chichester and Blondie Hasler.

Several changes were made to the boat's superstructure and rigging over the years, but the basic hull shape remained unchanged (indeed, Giles believed it could not be improved) until the structure was adapted for fiberglass construction in 1976.

Redesigned with slightly wider widths and a taller freeboard, over 40 Vertues were built in fiberglass, mostly by Bossoms in Oxford.

Wooden Vertues continue to be built to this day, in both carvel and striped planks, and the company recently sent out plans for Building 249 - although not all of the plans sent were completed.

Andrillot, the progenitor of this remarkable explosion of small boat sailing, was owned by the Kinnersley until 1947, after which it changed hands (seven in all) until 1982, when it was spotted by father and son Peter and the Tim Stevensons.

By that time, Andrillot was in a dilapidated state. Peter and Tim had to tow her across the Solent and move her to the family farm's hayloft near Lyndhurst.

There, over the next two years, they completely refurbished it, gutted the interior, doubled some frames, and replaced the old Stuart Turner engine with an 8-horsepower Bukh. In addition, the yacht was converted to Bermuda rigging, and its roof was extended, and the mast was installed on the roof, and not on the keel, as in the original. Peter and Tim kept the Bermuda rigging but restored the bowsprit. 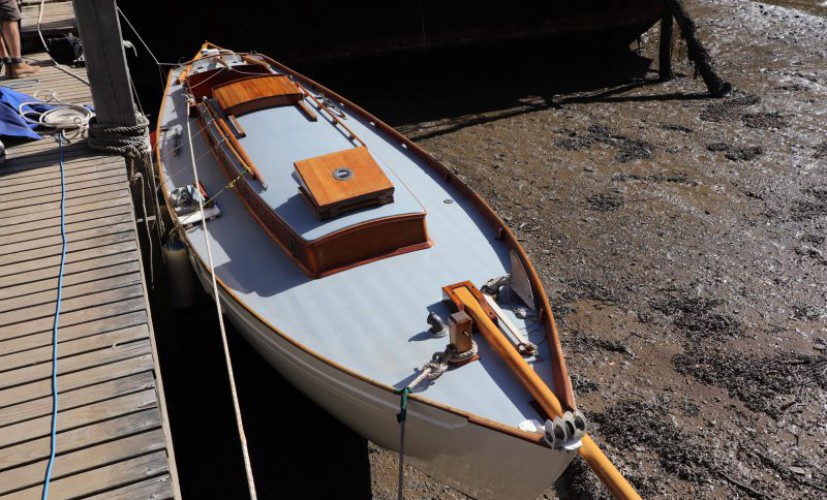 Over the next several decades, Peter and Tim walked extensively in Leamington on both sides of the English Channel. When Peter died in 2002, Tim took over the boat and set it up on the Aix River in Devon. But in the end, the wear and tear over 35 years of sailing made itself felt - especially on the elongated roof, which creaked under load.

Tim entrusted the ship's repairs to Dartmouth shipbuilder Michel LeMoinier, whose resume includes work on major restoration projects such as William Fife's sloop "Rosemary". He duly opened the roof and replaced the two deck beams by placing three heavy struts under the footboard to transfer the load to the keel.

In the process, he had to remodel the fok'le bunks and lockers. Once that was done, it became clear that the rest of the interior also needed updating. 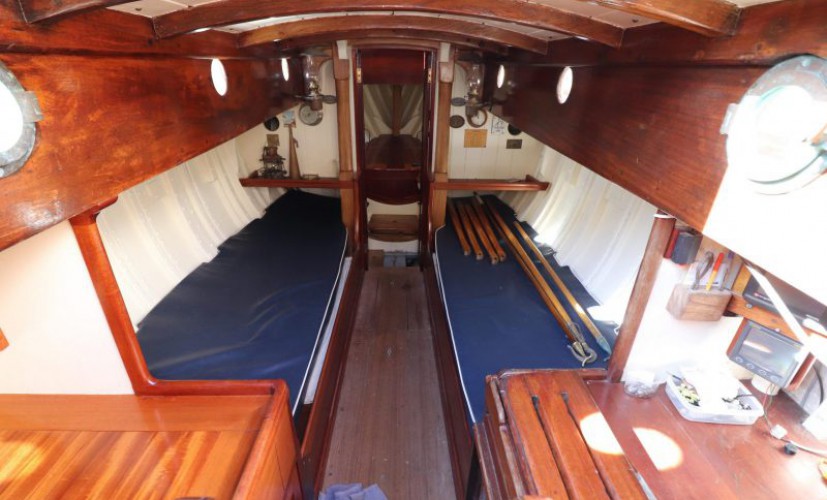 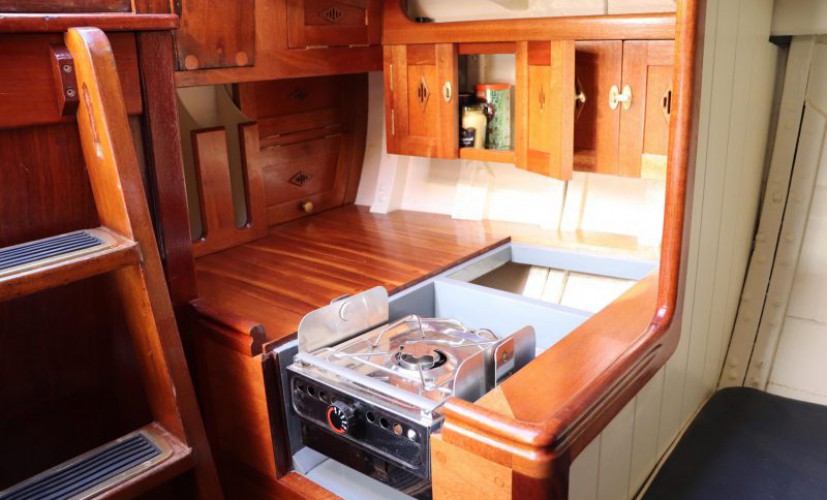 The cockpit soon followed. And so one job led another ...

Finally, towards the end of the summer of 2019, Andrillot was ready to re-launch, but all of Tim's hopes for an end-of-season cruise were shattered when a surveyor discovered a crack in the mast that had been there for many years and never caused problems, and sentenced her ...

This was the last straw for Tim and Andrillot was up for sale. By the time the new mast was made and a buyer was found, the UK was already isolated from the coronavirus, so Andrillot was not launched until August 2020 - three years after being pulled out of the water for repairs.

Uli Keeler turned out to be a kind of unexpected buyer. A former CEO of a finance company, he quit a well-paying job in 2010 after falling ill due to stress at work. As a result of a radical change in his life, he decided to maintain his love for boats throughout his life and studied at the Shipbuilding Academy in Lyme Regis.

He then set up a workshop at his home in southern Germany, where, along with custom-built dinghies, he embarked on a major rebuilding project for an 1884 slate boat called Wild Duck. But when it became clear that the restoration would take longer than expected, he decided to buy a smaller boat to sail. And then he discovered Andrillot. 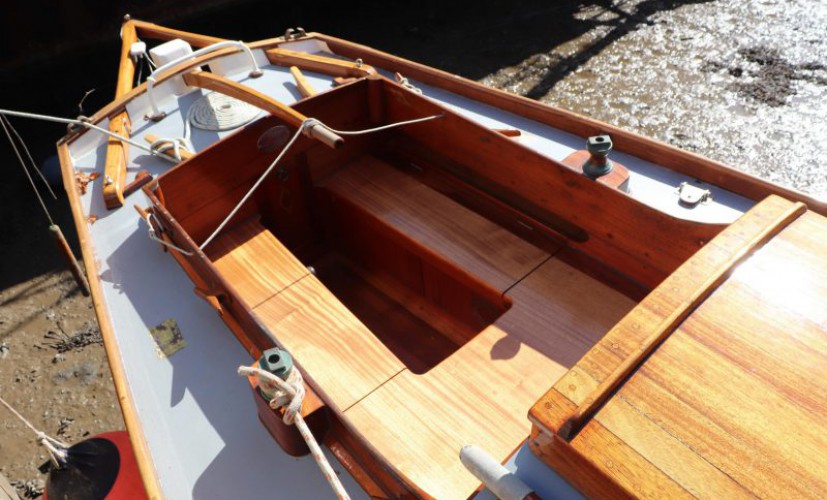 Uli managed only one test voyage on his new boat before at the end of August, with his son Moritz, sailed from Dartmouth to Vlissingen, Holland.

On the way, they were driven by strong favorable winds, they passed the Needle Islands, where the wind was directed against the current, in Lymington in the middle of the night a boat crashed into them, and near Dungeness they collided with a military training ground.

In the end, it took them two weeks to cover 380 miles, including a week-long stop in Coase for repairs - an average of 50-60 miles a day. And yet, despite the drama of the journey, Uli was euphoric with his new acquisition.

“The boat has shown itself to be very safe. Several times we accelerated to 7-8 knots. It's amazing that such a small boat goes so fast - more than the theoretical speed of the hull. "

The white cliffs near Eastbourne were very beautiful. And when we entered the harbor, people were interested in the boat and wanted to talk.

We met such nice people along the way. In the evenings it was so cozy, nice to sit there and have dinner. "

If Uli didn’t know the value of this boat when he bought it, now he certainly appreciated it in full. He talks about giving her back the slavery rig someday - perhaps in time for his 90th birthday - and hopes that once Wild Duck is restored, his son will own it.

And again, it looks like Andrillot will be passed down from father to son, as it did under the Stevensons. It seems, almost by accident, that a small boat with a big heart has found itself anew and found a caring owner who will take it to the end of its first century. Laurent Giles himself could not ask for more.

read also:
Mike Horn: From the Amazon to the Arctic Ocean and beyond
read also:
The new Fountaine Pajot range 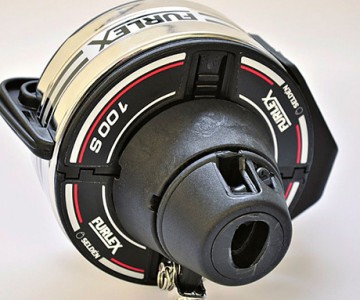 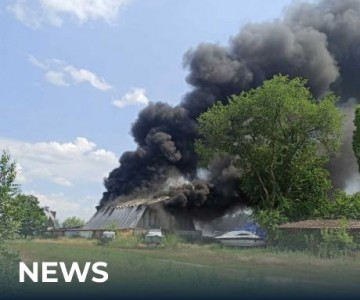 The Kharkiv yacht club was shelled!

The war, alas, continues. And continues to affect all aspects of life. Most recently - in May - the Nikolaev Yacht Club in the Ship District of the city suffered from shelling. This Tuesday, the Kharkiv Yacht Club in the village was shelled. Old Saltov, in the vicinity of Kharkov. 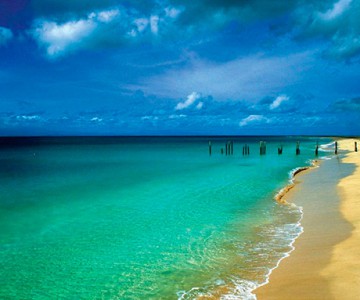