I have spent the last seven years on a yacht, sailing all the seas and oceans.
I was seven years old when I, together with my parents, went on a round-the-world trip on a yacht from Vancouver (British Columbia, Canada) where I was born and raised. We planned to make a round-the-world trip and come back one day. In fact, we did not set ourselves any time frame, we just went out to sea in order to travel. I agreed with this development of events. I was seven and wanted to see dolphins, ru 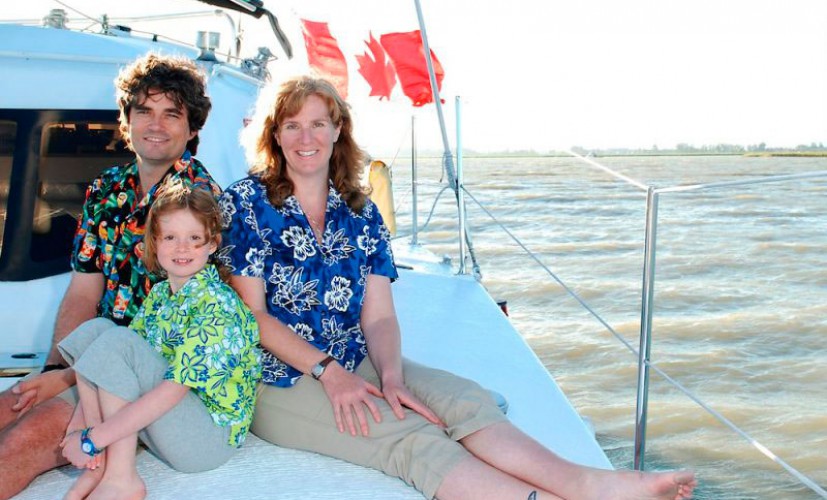 Maya and her family then

It goes without saying that when you are seven years old, life is perceived completely differently than at fifteen. I have spent more than half of my life on a sailing yacht and have sailed over 40,000 nautical miles during that time. (It takes about 25,000 miles to walk around the globe. I saw dolphins and swam with them. I played on more tropical beaches than I could count, and I found myself not a big fan of coconuts. Unfortunately, I still haven't seen the mermaids, but I still hope to see them. 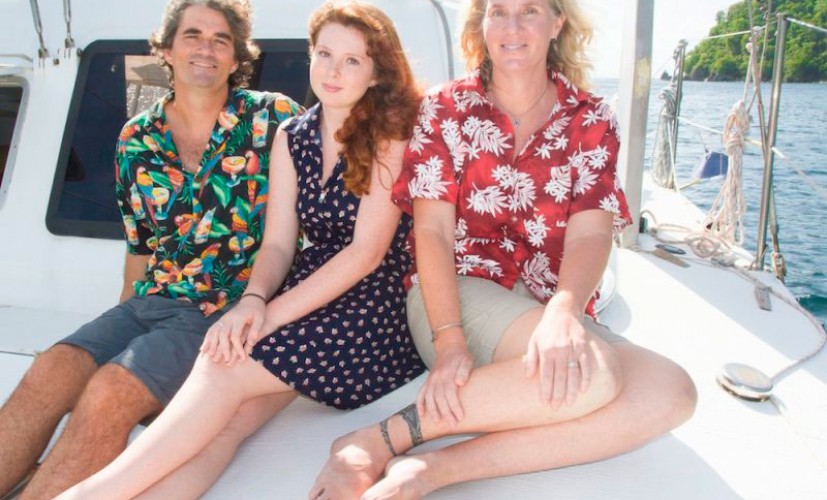 Maya and her family now

My boat, Ceilydh (pronounced Kay-lee), this is a forty-foot catamaran. My cabin is like a bed room. Three steps from my cabin is the main saloon, which simultaneously serves as a dining room, living room, office and study room. Windows around the entire perimeter of the cabin can be opened so that a fresh wind blows through the room even on the hottest days. 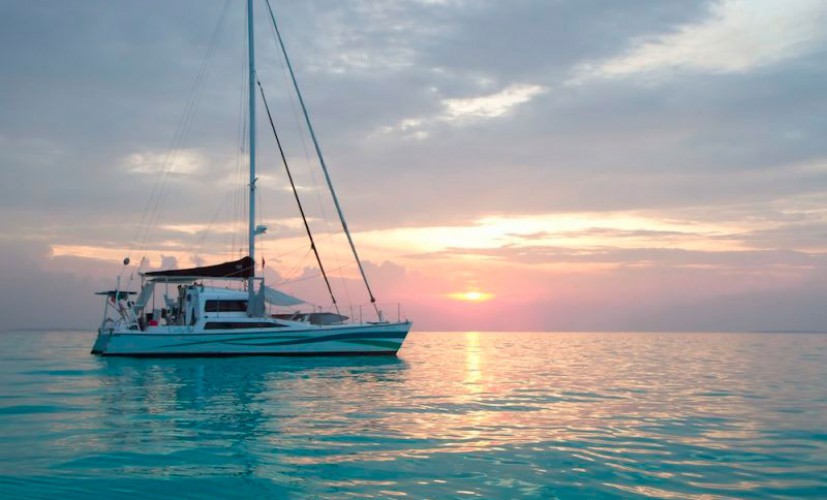 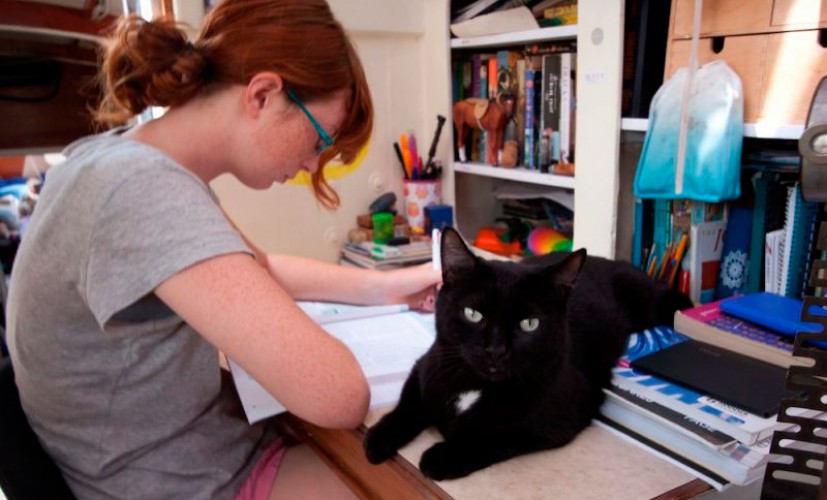 Maya in her cabin, next to Charlie the cat

The catamaran is a pretty house, just small. I don’t have the usual teenage opportunity to let someone pound on my door, simply because I don’t have a door.
People constantly ask me how I go to school, looking with wide eyes at my unconventional childhood, they constantly ask: - "Do you have a vacation all year round?" I answer them: - "No, I have such a way of life, I study on a boat"

My mom is a writer and she helps me with English and history. My dad is a shipbuilder and he helps me with math and other subjects, but it looks like biology is throwing him into a stupor. 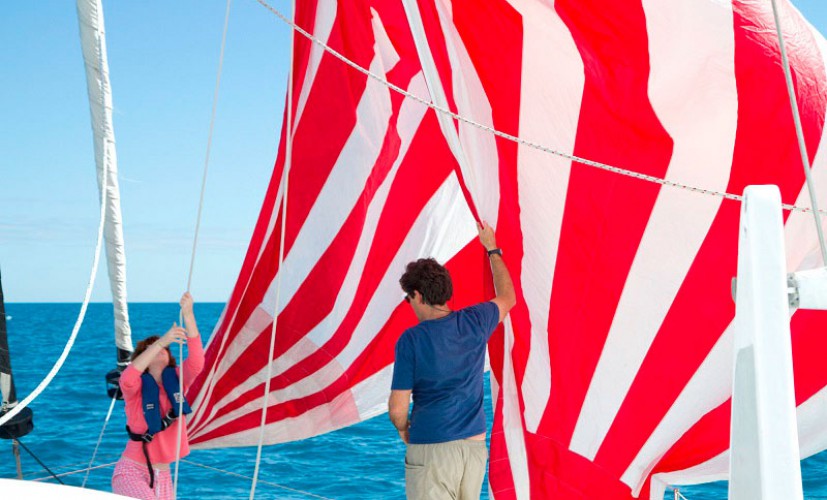 Helping daddy with the sails

They also ask me about pirates. We have never put ourselves in danger of colliding with pirates. Mainly due to the fact that we bypassed the places where they are active. I watched Pirates of the Caribbean at night in a movie theater in Mexico, but this was the first and last time I saw a skull and crossbones up close.

The sailing community is not that big, we all know each other. For this reason, dating is a rather problematic event. It was especially difficult in Madagascar. We traveled with a group of other yachts, I had a pretty good relationship with one guy. The adults used to make fun of us that we liked each other. 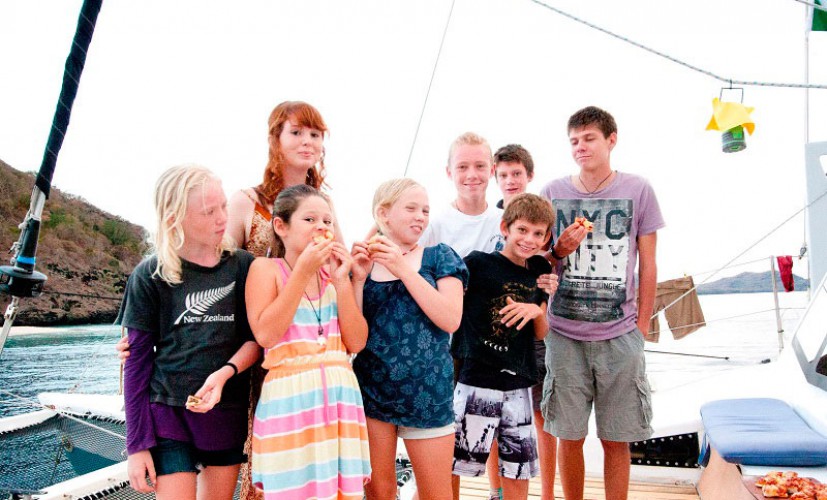 May with my yachting friends

After every barbecue, my mother came up to me and in a friendly conversation, she asked word for word, I laugh how close we are with J (let's call him that).

The next day, everything was repeated again: she spoke with our friends and they told her that they saw me and J walking along the beach together!

My mom is not one of the "preoccupied parents" - she just made unnecessary noise. I endured, but I had to ask her not very politely to leave me alone. Relationships are not so easy when there are twenty adults around, controlling your every step!

In a way, my relationship with my friends was quite ordinary. I learned to play Halo with a group of boys who needed another player. I played badly, but they didn't pay attention to it. It may seem strange to some people that we spent a lot of time on the boat playing video games while essentially in a tropical paradise. But I was tanned, it was hot outside, so we played Halo and got to know each other with banter and popcorn battles. 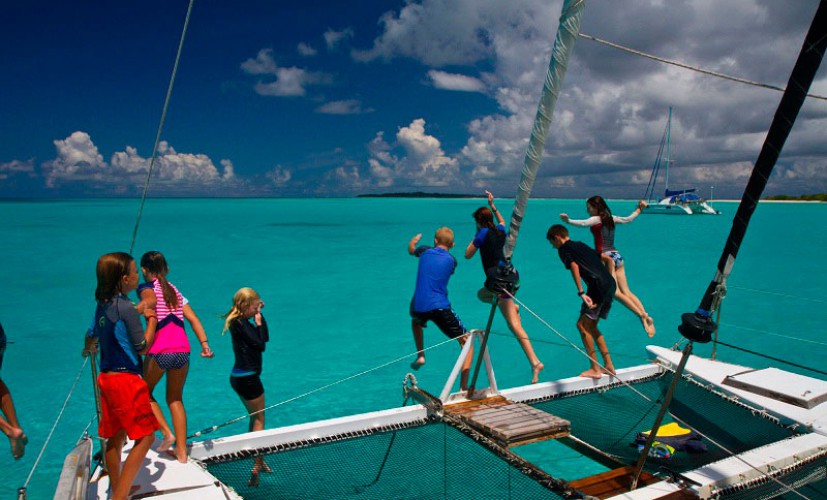 Children from different boats play together on the yacht Ceilydh, Maldives

It may seem strange, but the first thing you notice when you arrive in a new place is smells. Each area has its own characteristic smell. Sri Lanka smells like fresh black tea, spicy curry and natural silk scent. On the island we saw low mountains, bright green in the sun. I love Sri Lanka. It is often perceived as the most luxurious part of India, with the most beautiful and exotic nature. We traveled around the island, staying in small hotels enjoying the clean mountain air and spicy crumbly rice and tortillas for breakfast. 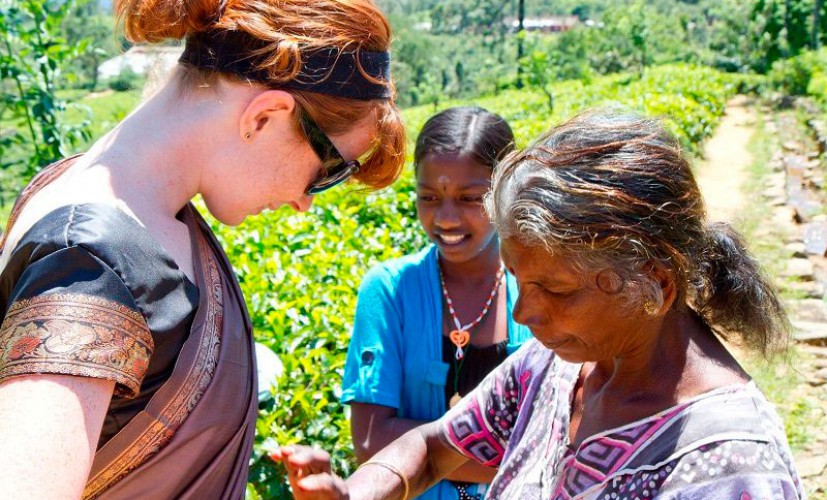 Storms in the ocean

Crossing the Indian Ocean was the most difficult in comparison with other oceans, through which we had to cross before. Growing up is also due to the fact that I began to become more aware of the dangers at sea and the effects of the weather. At the crossing, I stood watch while my parents slept, I watched the approach of squalls and storms. I learned by the direction and strength of the wind to determine whether our yacht will be captured by an approaching storm or will pass by, and it became clear to me how dangerous such a way of life can be. I have always known that if I fall into the water I can drown, but only in the Indian Ocean, I realized how dangerous a sailing trip can be. 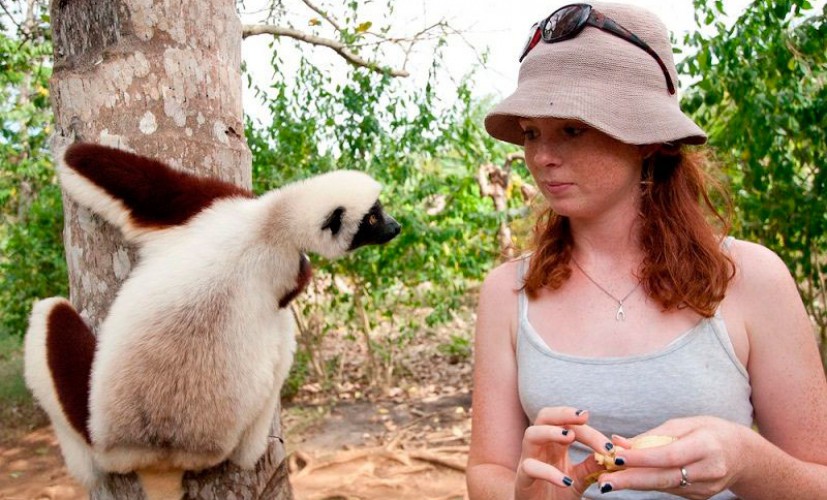 Face to face with a lemur in Madagascar

Despite the dangers, I have the best memories of our journey: it's nice to lie on the deck with a whole bunch of friends, watch movies under the starry sky, it's nice when a warm wind blows over your body; it is interesting to dive with scuba diving in the Maldives; make friends with women in Sri Lanka and learn from them how to properly pack a sari; chatting with friends at sleepovers hugging each other carelessly joking and laughing, even if the jokes may not seem so funny. 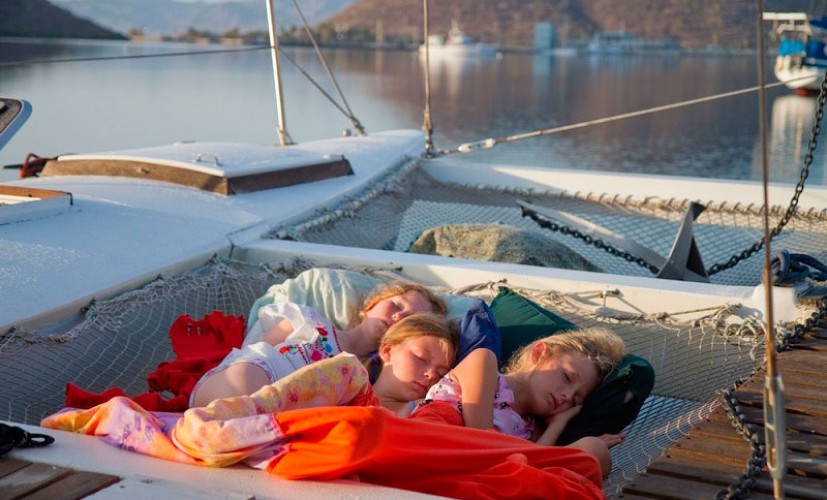 Overnight on the boat 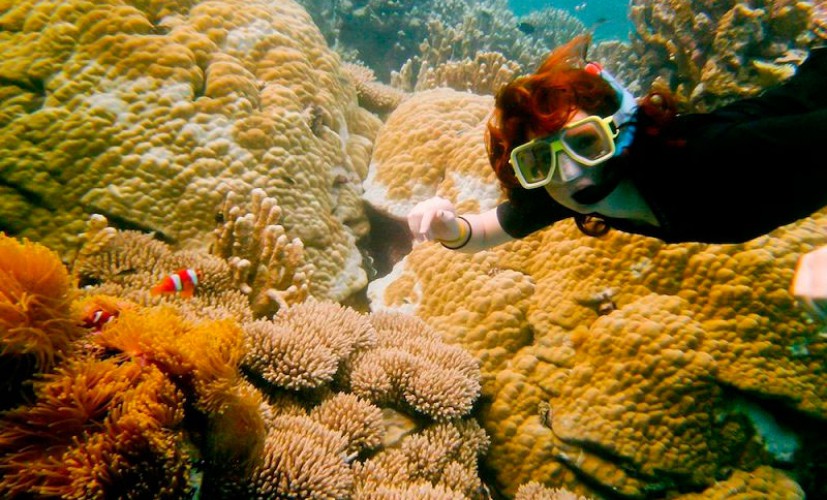 One of Mai's many dives

Visit the most mysterious place in the world

The tiny island of Saint Helena, the most remote island, somewhere in the middle of the Atlantic Ocean. It can only be reached by boat and fresh food is a great luxury. This island is also truly magical. It rises above the sea like a black forbidden rock that makes you think of one of the mysterious castles from Game of Thrones. I patiently looked out for the flying dragons in the sky, it seemed incredible that there was not a single dragon on the island. 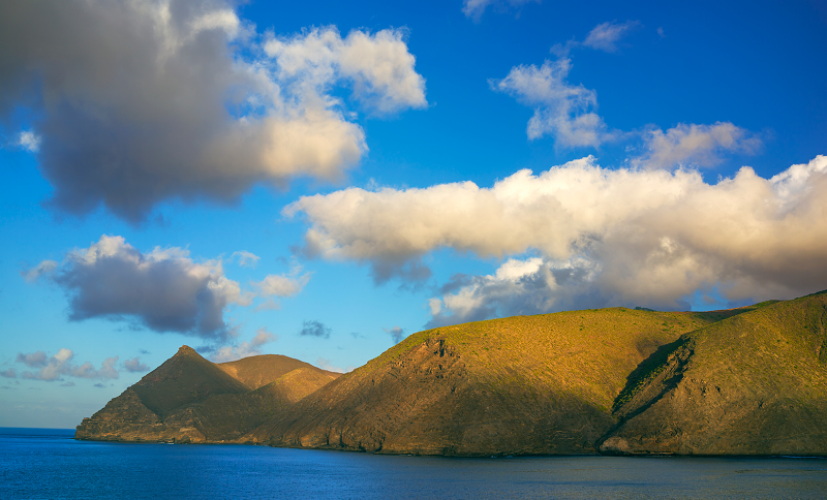 We soon learned that the inside of the island is perceived differently. The interior of Saint Helena is lush and pastoral, very much like rural England, even with sheep. The locals (the Saints as they call themselves) are very friendly personalities, but it is very difficult to understand their speech. Their accent turns the word "wash" into the word "wish" and they also speak incredibly fast. Whole dynasties from Great Britain also live there. They are a little weird, eccentric and wonderful people. On the island, I became friends with the daughter of the former governor, as well as a small film crew who was filming a documentary about life on the island.

We spent time hiking, visiting Napoleon's grave, and walking donkeys at the local donkey sanctuary. Having planned to spend two weeks on the island, we stayed there for six weeks. We stayed to celebrate Saint Helena, on this day the population of the entire island gathers together in the main city Jamestown for street festivities. We walked with a huge number of people along the narrow streets, and got into our boat in the evening to the fireworks exploding behind us. 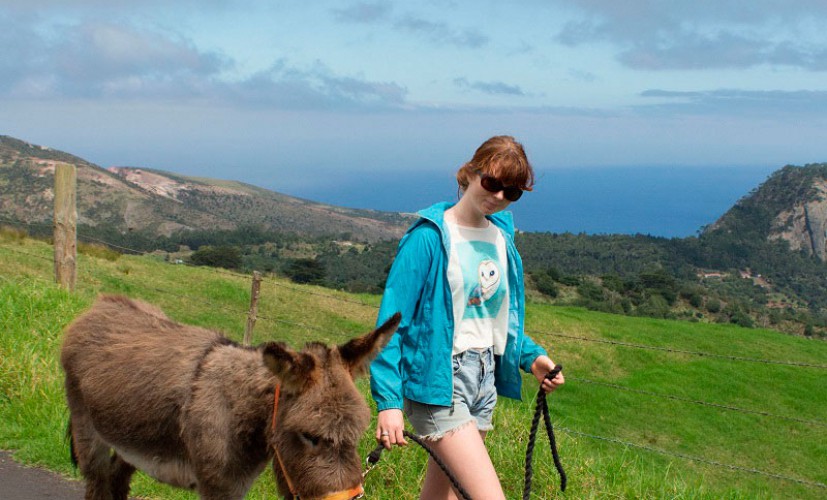 Maya walks a donkey in the island donkey sanctuary 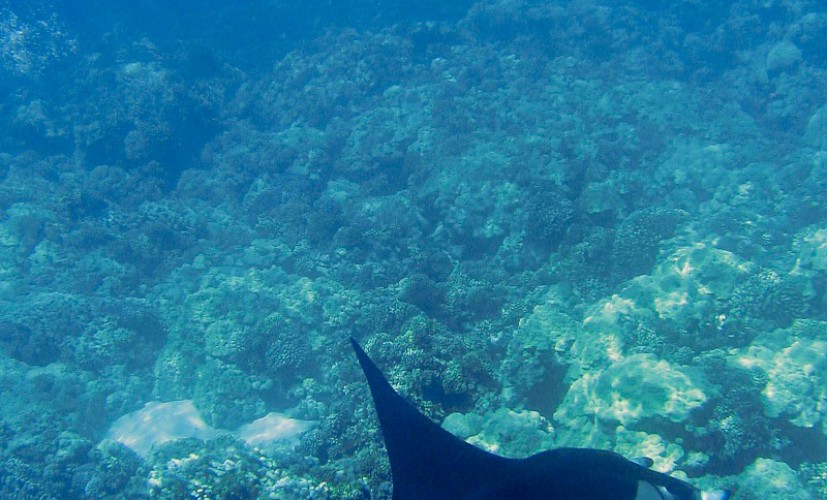 Swimming with a stingray 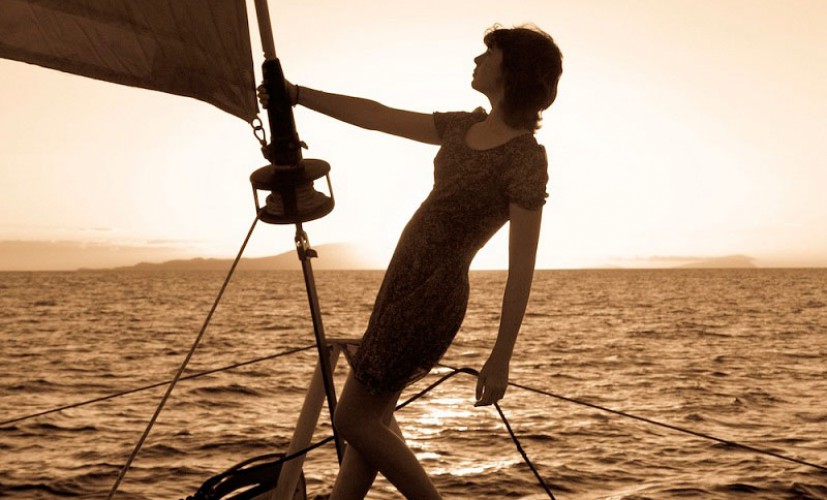 My journey is almost over

Soon enough, I'll be back home, go to regular school, and make regular friends. I will live in an apartment and maybe go shopping on weekends and have a temporary job. My extraordinary life, where I saw amazing things, met incredibly interesting people and learned a lot about myself - will be completed.

Sometimes, more than anything else, I want to have the most ordinary life. On other days, I look through my huge windows at the constantly changing picture around, or through the hatch I climb out onto the deck in order to lie on it and watch the starry sky, at these moments I feel in an exceptionally right place.

Maia Selkirk a writer who is only 15 years old with her parents, she lives and travels on a yacht. Now they are passing by Tobago. A source 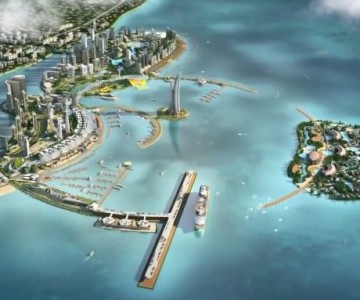 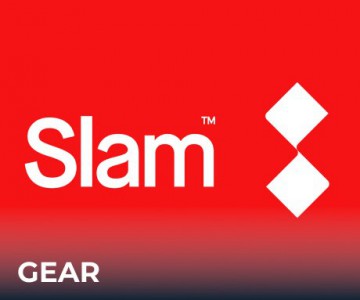 Clothing brand Slam is back!

In the world of yachting clothing, it is not often that there are big launches of new clothing lines. That is why Interparus could not pass by the grandiose event that the Slam brand arranged at the end of May! 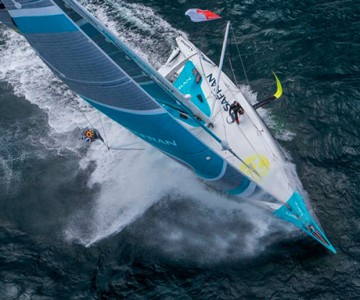 (24 November 2016 Day 19 18:54 UTC) - Following a damaged steering gear and a decision with his team and partner this morning, Safran skipper Morgan Lagravière has confirmed his retirement from the Vendée Globe.