Behan Gifford, a California native who has lived and traveled on a sailing yacht with her husband and three children since 2008, describes her own family adventures afloat in her writing. 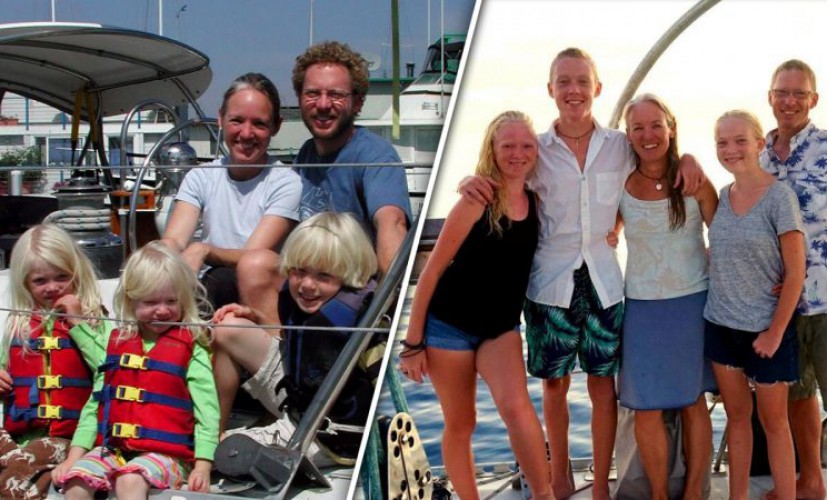 I wasn't particularly keen on ignoring the flag protocol.

And yet, along the way, the language of flags took on meaning. 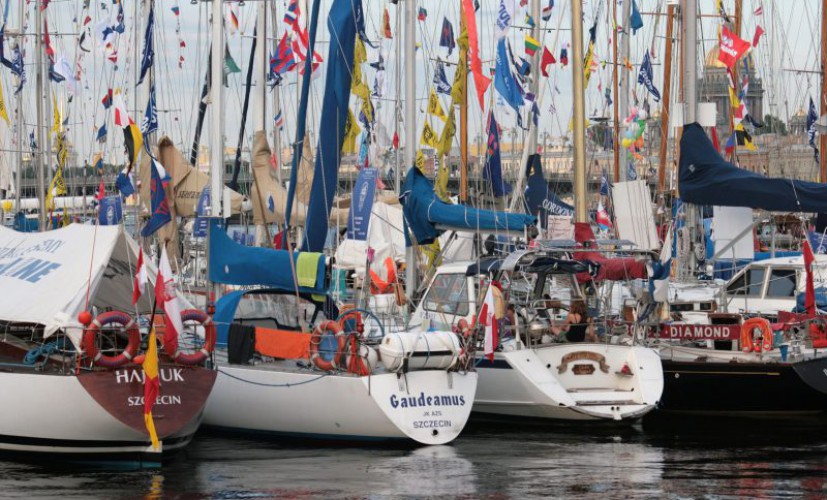 I will never learn all of the coding signals, but the basics of proper flag etiquette show respect and are fairly easy to learn.

A mistake in most cases just makes you look stupid, but it can also cause trouble.

Here are the basics to help you stay polite, and some bonus tips to boot. 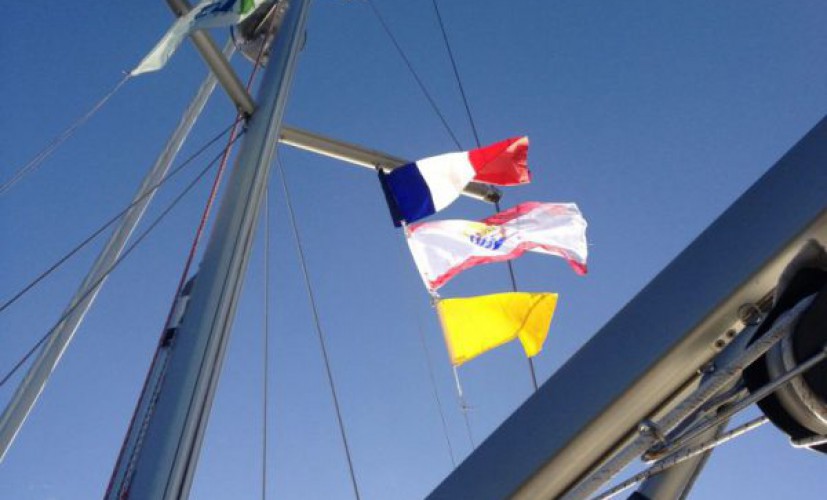 There are countries that require this, and may have some other conditions.

For example, in Indonesia, this is a requirement, and if you fly your national flag, then it must be smaller and lower than the flag of Indonesian courtesy.

Regardless of whether it is mandatory when your boat is allowed to sail as a foreign vessel, it must go with respect.

- When: when moving from international to territorial waters, raise the yellow flag "Q" (Q = quarantine). You raise this flag (and only this one, not the courtesy flag) until you have a pratique (official permission in this country). 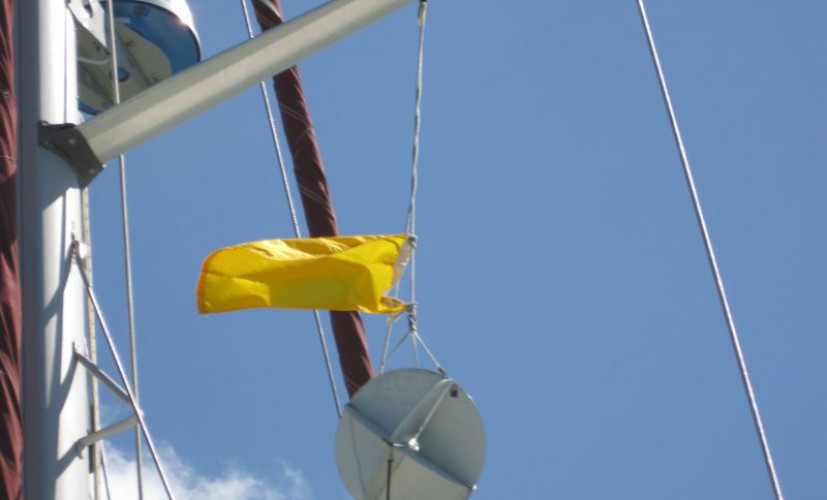 - Where: the halyard to the right of the main mast, down to the lowest spreader, is the correct position.

Courtesy flags are displayed around the clock.

Other flags (foreign guest, private signal, etc.) are flown from the port side.

Out of respect for the host country, we always raise the courtesy flag. Unless the only one we have is ripped apart enough to sound offensive. We try to provide a replacement when the first signs of deterioration appear.

If your boat's layout does not follow any of the guidelines described, contact Chapman Piloting. A great reference to have on the shelf of a cruising boat!

When the annual cruise fleet arrives in Mexico, there are many fluttering flags on the boats of today's cruising anchorages.

Good intentions! But poor performance can be awkward or even offensive.

An inverted flag is offensive and can be a surprisingly easy mistake depending on the design of the flag.

When we were in the Comoros, we accidentally turned over the Comorian flag. This wasn't in our books (a rare sailing destination) and the flag didn't have a handy “up here” sign: I found myself examining the lapels on officials to determine if the yellow stripe should be up!

If you want to fly a different flag (say you have a guest from Brazil on board, so you want to fly the Brazilian flag), then this will go from the port side: not with your courtesy flag, not with a transom (reserved for the country in which you are registered ).

But keep in mind that the relative size of the port flags should not overshadow the courtesy flag on the right flank - this may be considered offensive.

When stacking flags, the order represents a hierarchy: highest honor means the highest flag, and so on. But if several foreign guest flags are flying, alphabetical order is appropriate. 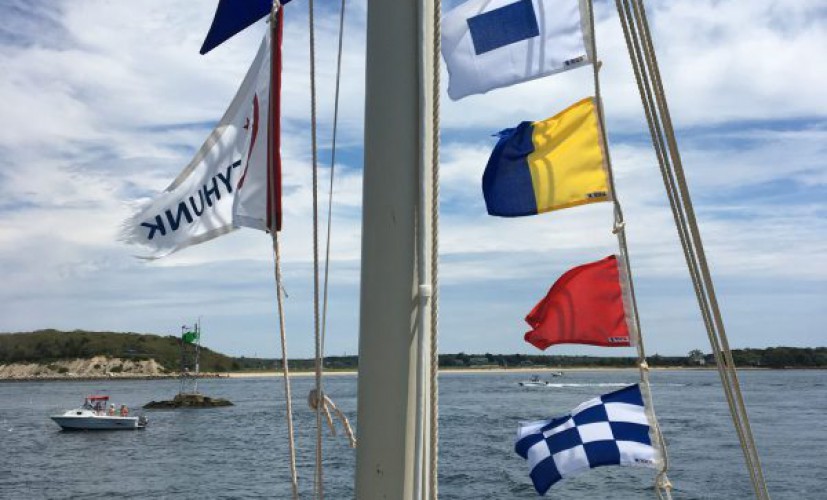 Placing the flag of one nation on top of another on the same halyard can be considered extremely offensive (up to a military act) in relation to the lower flag.

Do you have only one halyard to starboard? Then it is only for a courtesy flag, do not hang others.

Make sure you have the correct flag!

The courtesy flag is usually the national flag of the country you are in.

In some countries, such as the Bahamas, a banner is used instead; it is similar but not the same as a flag.

It's not a shame to be wrong, but it's nice to improve.

We missed the memo, we had a national flag on board instead of a banner, and it's a pity that we didn't know this before.

Raising a flag that is wrong on 100% may be an innocent mistake, but it may offend your master.

A friend of ours wondered why his Dominican Republic courtesy flag is not the same as other boats in Dominica - oops!

When we arrived in New Caledonia, our friend Brian greeted us from his trawler Furthur with words of caution.

On its flagpole was the New Caledonian flag of the Kanak people, respectfully raised after receiving permission.

This caused him to get caught by the very embarrassed gendarmes who rushed to fine him! (Full story on his blog "The Adventures of Furthur").

This was French territory, and the waving separatist flag caused him trouble; his choice was unfortunate.

Where to get flags

It is useful to buy flags in advance and prepare them for your route. 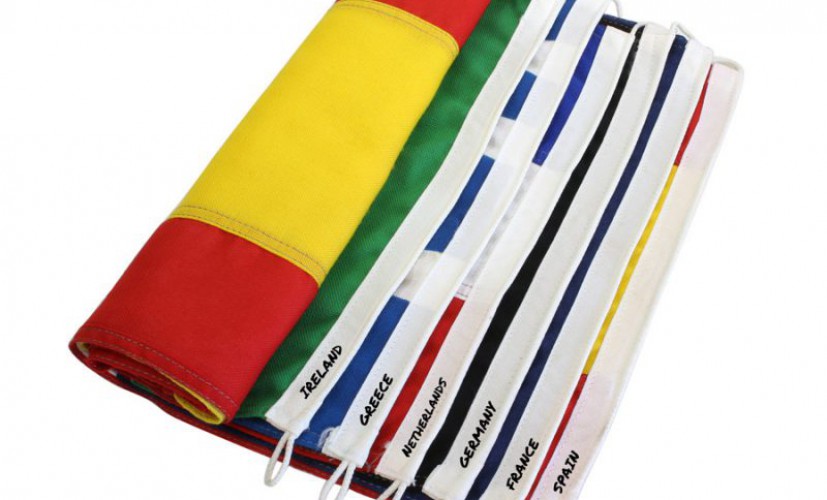 There may be no flags at the destination, and until they are found, you are not ... polite!

I tend to buy ours from regional collections for convenience and price.

In recent years we have started looking at Yacht Flags for our courtesy flags as they are well made and well priced.

They are printed on durable nylon with a reinforced lifting eyelet. And besides, it's a small boat-owned business! I love to support it. 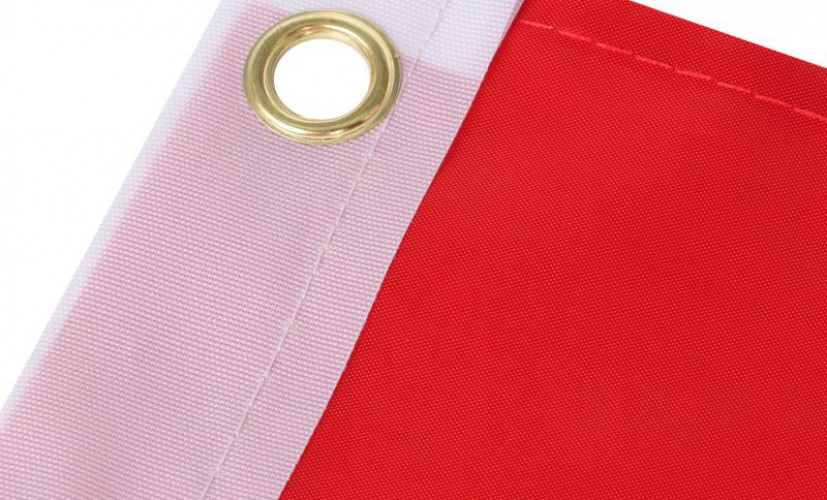 For most of our cruising years, we used cheap nylon flags, usually for a few dollars each.

Conveniently, these 12x18 ″ flags are exactly what suits a courtesy flag on Totem.

The downside is that they only last a couple of months: made for a table or shelf, not sun and wind!

However, sometimes it has to do with how long we will be in the country. If we stay longer, it is usually easy to find the flag in place. Although, I prefer the option that is more durable and at the same time affordable (closer to $5 per flag).

The most expensive, as a rule, on marine chandlery: from $20 and up.

However, sometimes they can be made better: for example, Taylor's flags are heavy-duty nylon with strong reinforcement on the lifting side, and on the wave side with additional stitching. It is also a way to get the correct Bahamian flag. 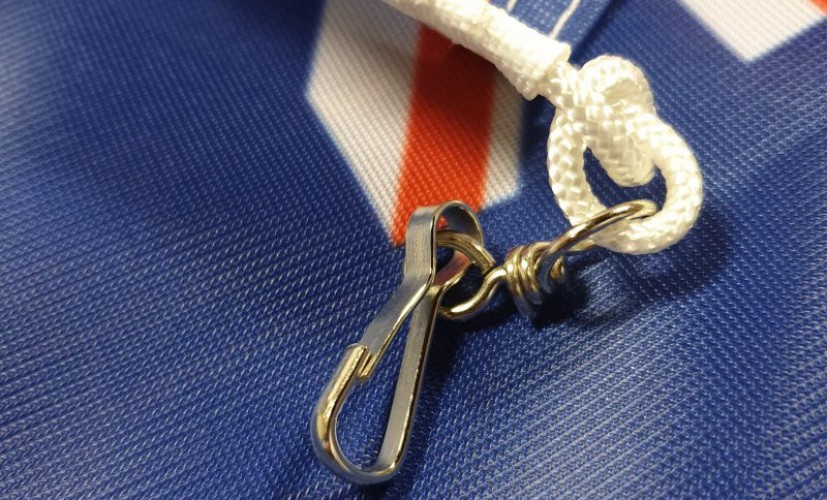 Some people make flags themselves.

This is too ambitious for me, although we did it when necessary - including drawing birds of paradise on the flag of Papua New Guinea, which I sewed from the clothes on board in the correct colors.

We still want to get the most out of the flag!

Multiple zigzag vertical seams on the flying side of any flag extend its lifespan.

Some cruisers sew in extra strips or coarse threads to soften the banging of the wind. 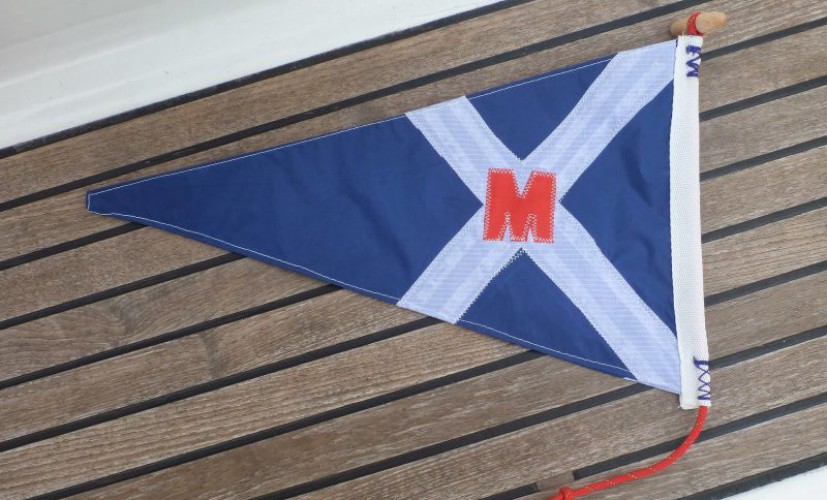 But what about "Fly the American flag"?

The idea that raising the American flag in other countries is causing trouble because Americans don't like Americans hasn't played out in our experience. 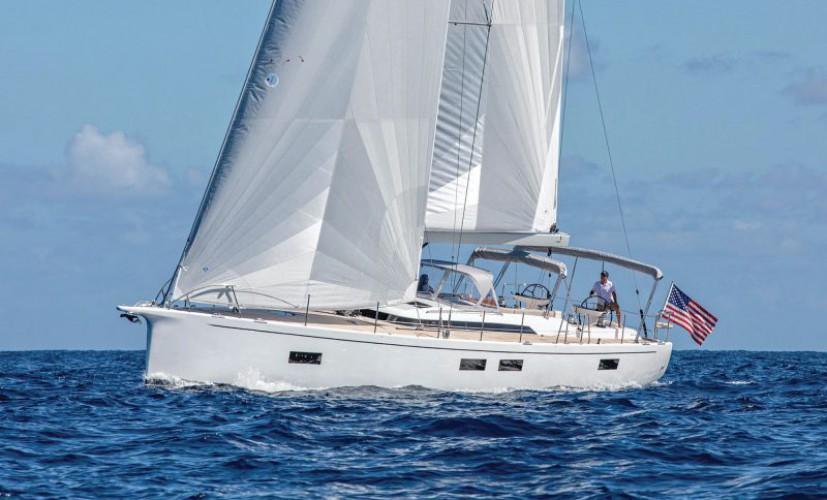 We have never hidden our national identity and have never experienced problems (and I don’t know a single cruising ship that has them).

We also rarely go with the American flag, but that's because the UV flag wears out so quickly and a new flag every six months is a luxury we don't fit into our budget.

The banner (such as our above-described US flag, but with an anchor instead of 50 stars) is only intended for use within the US.

What problem did we have?

The flags were worn regularly! By the time we arrived in Malaysia, we were forced to go under the banner.

The most durable on board are the "Battle Tough" flags from Gettysburg Flag.

Seeing the length of our courtesy flags strung together was a powerful feeling!

And every time we enter a new country, we have another reminder.

Our tough old quarantine flag is filled with sentimental value.

It dates from the mid-80s, as did Jamie's plan to sail to the Bahamas and beyond on Sparkman & Stephens, designed by Sailmaster 22.

Freezing weather and empty pockets thwarted his dream back then, but his Q flag is nearly 40 years old and has been part of the permitting process in 47 countries and territories, continuing its history on the water.

read also:
10 beautiful bays and bays in Mediterranean for an unforgettable sailing trip
read also:
5 ways to make the life of children on a yacht happy 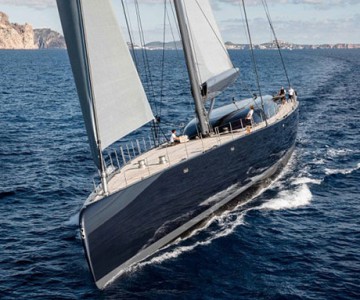 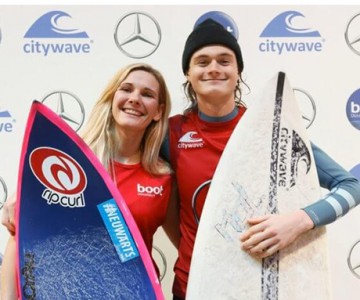 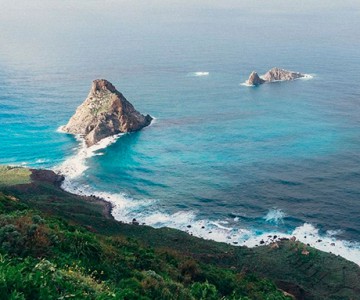