The imagination of a superyacht designer has no limits. We will look at the most radical and unusual superyacht concepts that are guaranteed to impress you.

Servo Yachts and Shuttleworth Design have joined forces to unveil the 45m Martini 6.0 Concept. This is an unusual catamaran with a pneumatic float system. So the boat manages to “extinguish” the pitching. 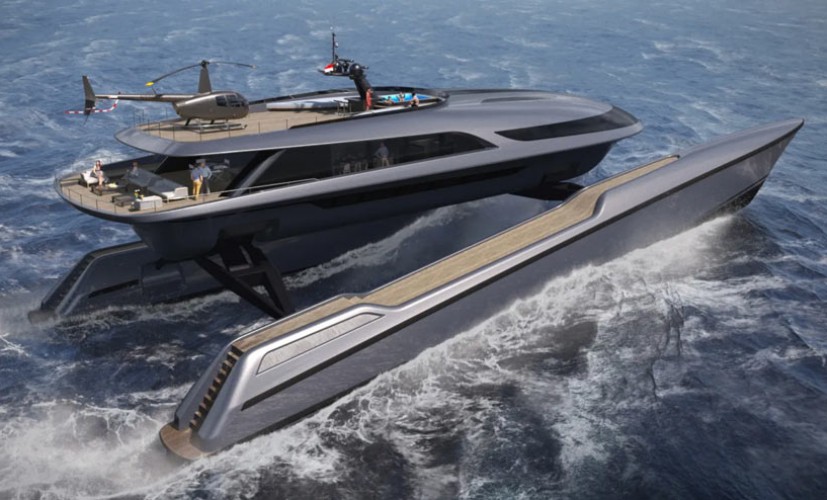 The height of the catamaran can be adjusted up to 4.5 meters. A feature of the steel is just the floats, which can move independently of each other.

The fully eco-friendly 110-meter yacht VY-01 was presented by the German studio 3deluxe. The peculiarity of the boat is the garden inside the hull. The concept will be powered by fuel cells powered by hydrogen and biomethanol. Silent electric motors are also available. 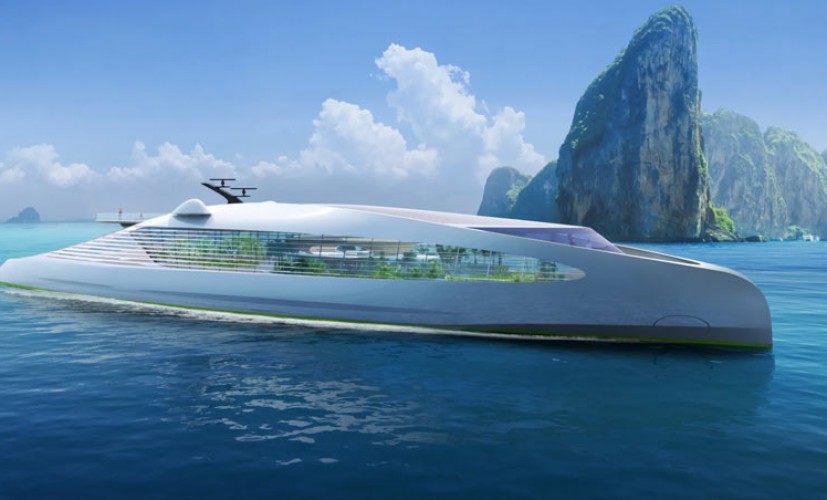 The cruising range should be 3,240 nautical miles. The yacht has been described as a "floating garden of paradise" and the interior is complemented by a system of various sensors. They will help not only in the care of the garden, but also for other parts of the vessel.

Dutch shipyard Oceanco has teamed up with design studio Pininfarina to develop the concept of the 90m Kairos hybrid superyacht. A concept described by Oceanco as "a floating living island that lets you enjoy the moment." 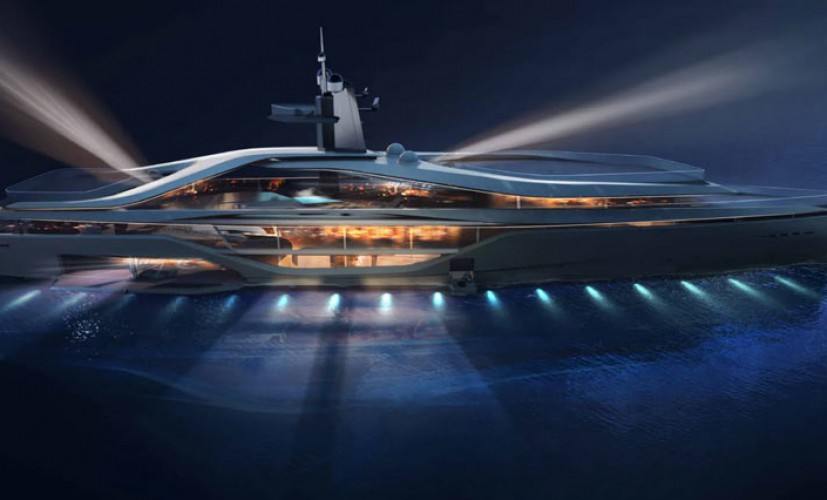 It is assumed that the Kairos will be a hybrid power plant E-Hybrid. The E-Hybrid uses batteries as its main power source. According to Oceanco, the result will be “no noise, fewer vibrations and emissions no longer a problem.”

This concept is inspired by Lewis Carroll's children's story. The 98-meter eco-friendly concept from Lürssen has five decks. It was shown at the Monaco Yacht Show 2021. The concept includes an unusual, fully open main deck and is powered by fuel cells. 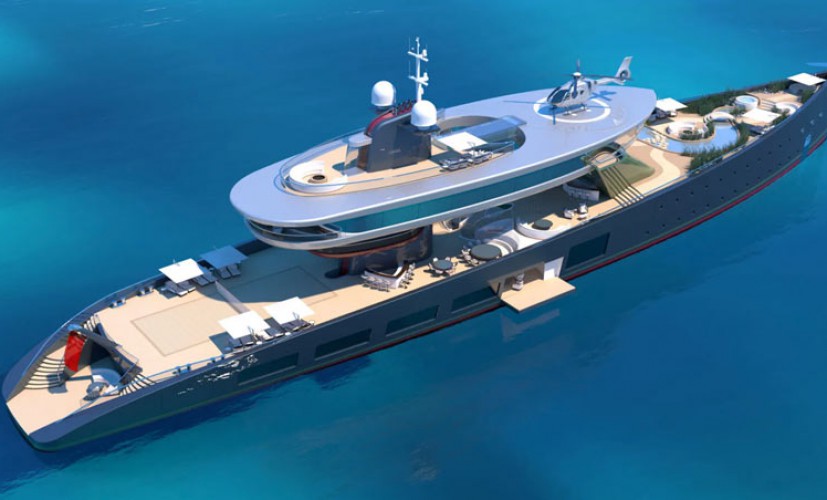 Jim Sluiter, the exterior designer, said: “On many yachts, you see the superstructure and hull connected to each other. I have separated these two parts. So you have a hull, a superstructure, and an interesting outer deck in between."

The designers of the futuristic 70-meter superyacht Codecasa Jet 2020 were clearly inspired by aviation solutions. 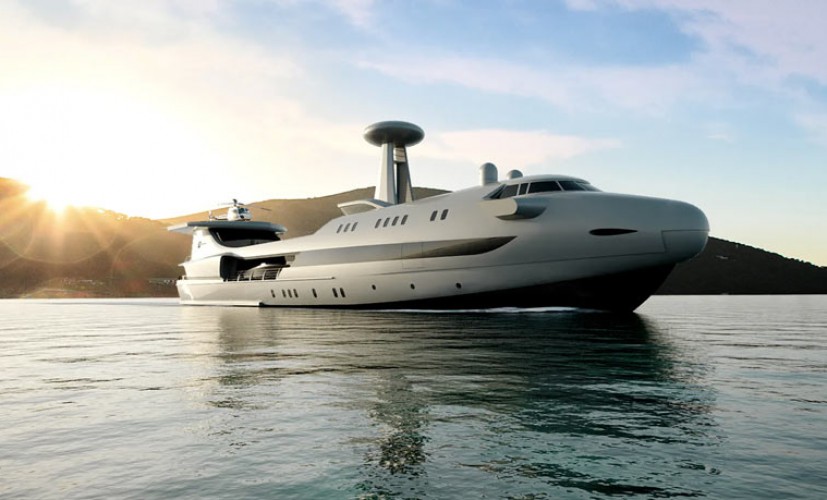 So, the deck for rest, which extends in the stern, resembles the "tail of an aircraft." In addition, the yacht's air intakes are somewhat reminiscent of a jet engine.

Other features include "huge exterior and interior spaces", a swimming pool and an indoor gym.

The concept of a 144.2-meter sailing yacht called Lucaya was presented by Kyron Design and equipped with DynaRig sails. The yacht is designed for cruises in the Bahamas. 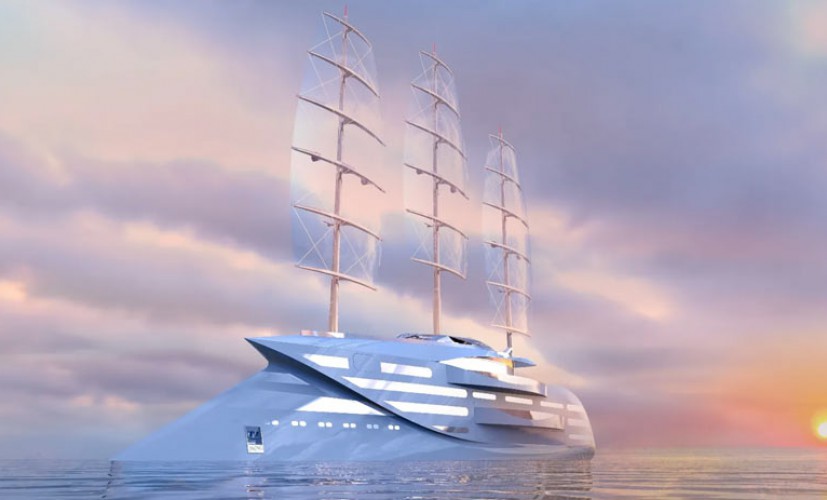 Design highlights include three masts, a dedicated heliport and a beach club with an open-air bar and aquarium behind the cocktail station.

Created by Beiderbeck Designs, this 200m concept is designed to "push the boundaries of what's possible". The catamaran is equipped with a methanol power plant and will be the "pioneer of geothermal energy" in yachting. 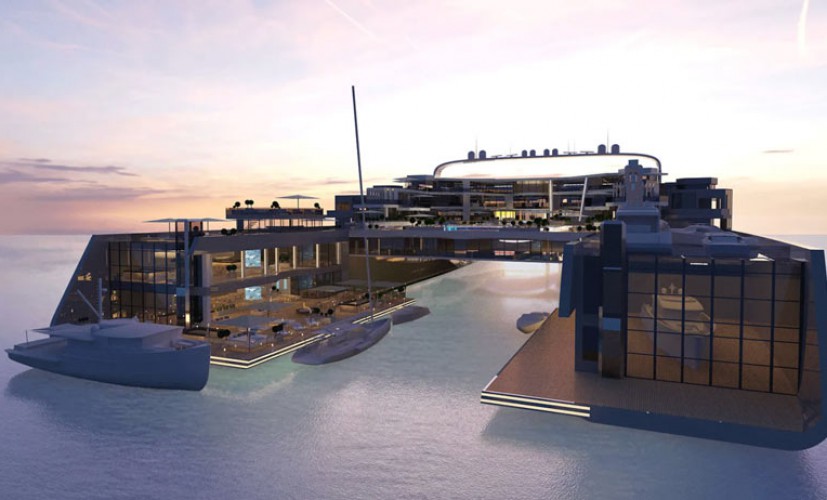 Key features include a retractable restaurant and a real 80m pier. It is equipped with all the comforts of a real marina. Project Galileo² provides storage for up to 25 boats, submersibles and toys. In addition, an outdoor cinema, a hospital and a 500 square meter swimming pool are available. The yacht can accommodate 38 guests and 75 crew members.

Earth 300 is that step towards "nuclear yachting". This yacht is powered by a nuclear power plant. At the same time, Earth 300 is a research yacht. 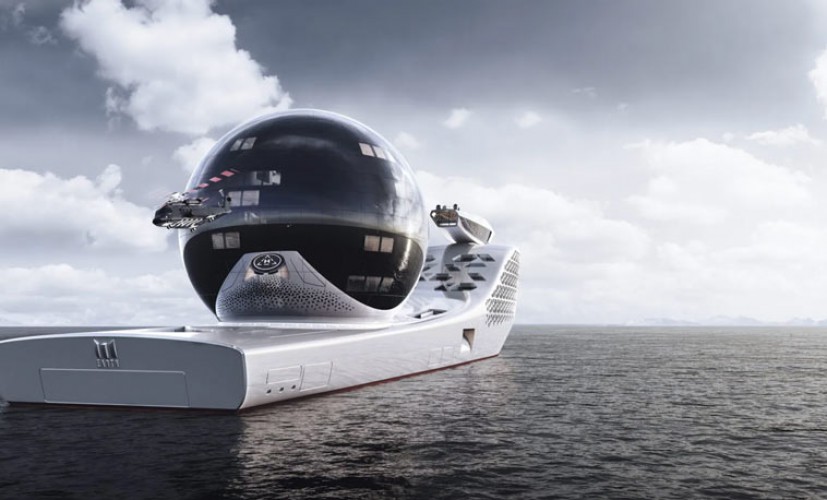 There are 22 laboratories on board, accommodating 400 people. The crew of 400 includes 160 scientists, 20 resident experts, 20 student assistants, 40 VIP guests and 165 crew members.

Lazzarini Design also developed the concept of the 137m superyacht Avanguardia. A source of inspiration… However, you yourself see everything.

The head of a swan is used as a steering post. It can even be separated from the yacht and it is possible to use it as a separate 16m boat. The five decks of the Avanguardia can accommodate 24 guests, 10 crew and 12 staff. 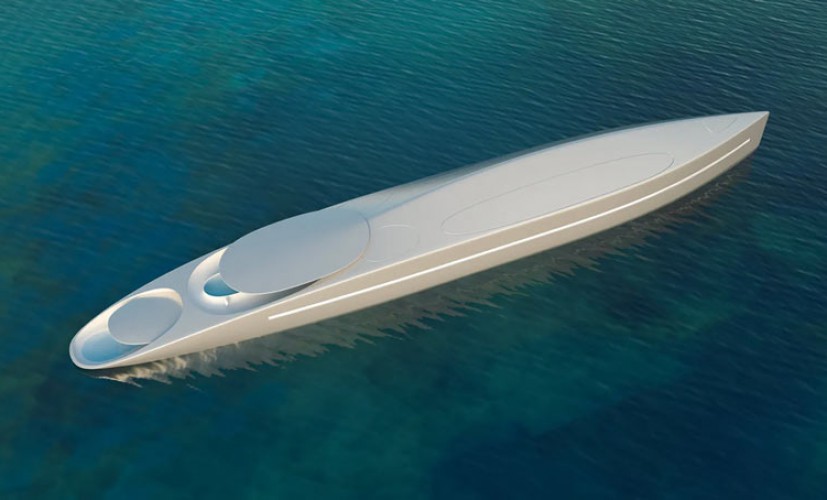 Powered by a diesel-electric hybrid propulsion system, the Project L is designed to “glide” through the water. Futuristic elements include a high-tech underwater media room, a dinghy bay and an underwater escape pod.

Another super yacht with a length of 153 meters from Lazzarini Design. She has six decks. The yacht can carry up to 8 boats in two compartments and as many as three helicopters. 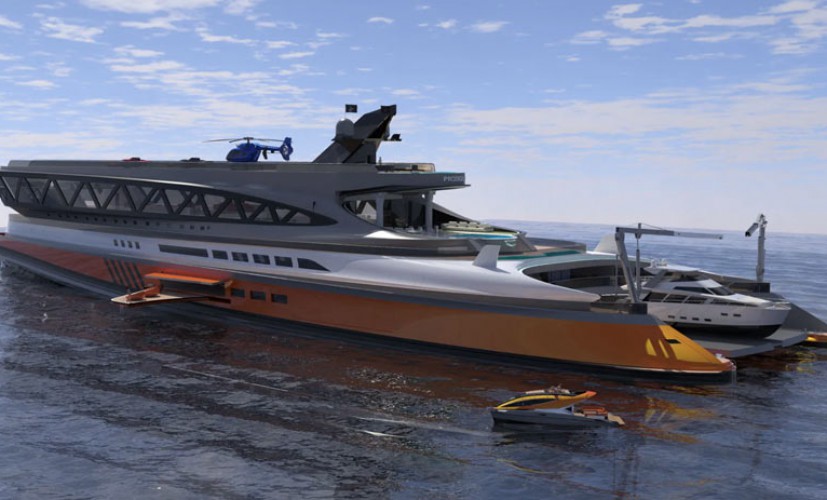 The upper deck, made of carbon fiber and aluminum, is shaped like a shark. In addition, the yacht has three pools with waterfalls cascading from each pool to the one on the deck below.

This radical 70-meter concept from designer George Lucian is designed to draw public attention to the problem of climate change in the Arctic. 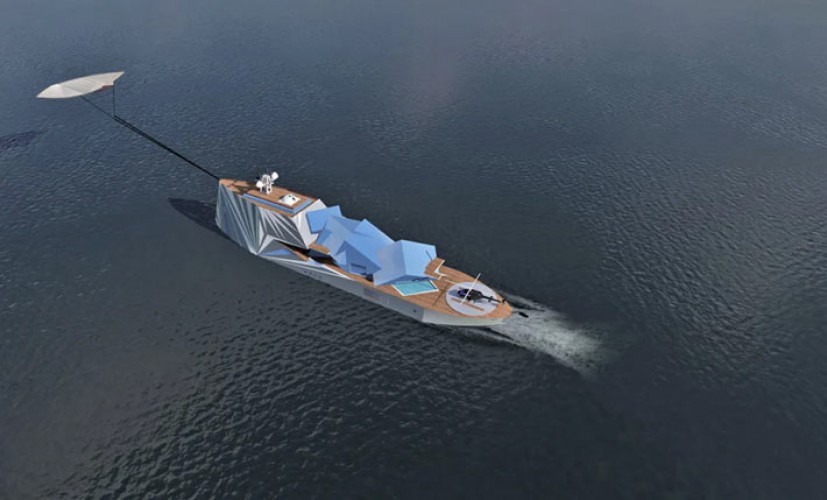 The Fata Morgana is equipped with an Ice Class hull and is intended for sailing and chartering in the Arctic regions. Key features include an unusual bow, an outdoor swimming pool, an astronomical observatory and a helipad. Fata Morgana, designed with ultra-low emissions in mind, will be equipped with devices capable of tracking and instantly transmitting ocean temperatures.

12 guests and 18 crew members will be accommodated on board.

The 63.2-meter yacht Hypnosquid by Roberto Curto has an interesting name and no less unique design. One of the key features of the exterior design is the line of LED colored strips on the windows. When they are turned on, they are shaped like cuttlefish eyes. 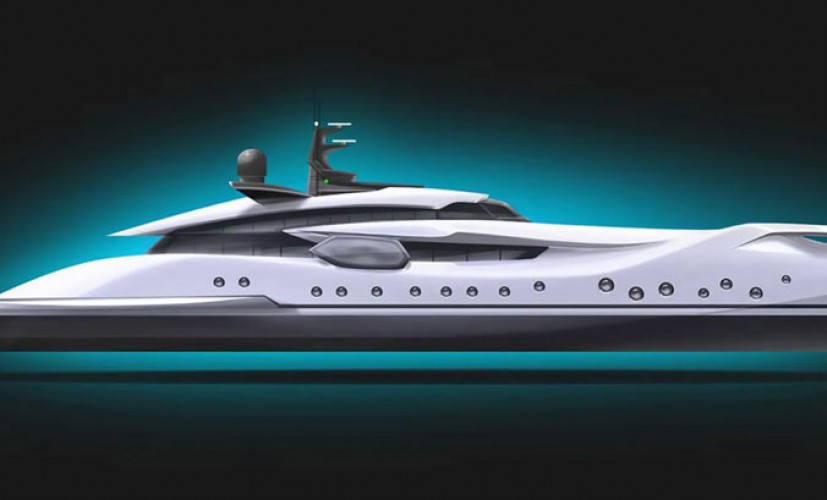 The Hypnosquid, designed for 10 guests and 12 crew members, also has a garden, a massage center and a cinema room. Special touches include a jacuzzi waterfall and a dining area. The dining area is combined with the galley and guests can watch the chef at work while eating.

The 110-meter Elyon concept has a simple but ambitious motto: "Only up!". This approach is reflected in the many features aboard the yacht: indoor and outdoor pools, spa, gym and wellness center, and even a casino lounge. 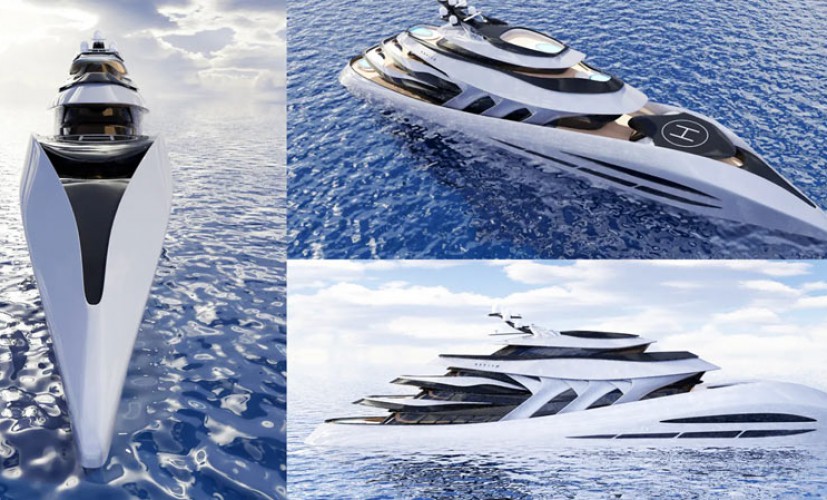 The amazing exterior was inspired by the calm waves and features a tilted back bow. The yacht is designed to accommodate 30 guests, and her hull is designed to reach a maximum speed of 18 knots.

The imposing bulwarks rise six meters above the waterline, providing a huge amount of space inside the yacht. The aft garage has storage space for two luxury cars. The yacht is inspired by 19th century pirate ships! 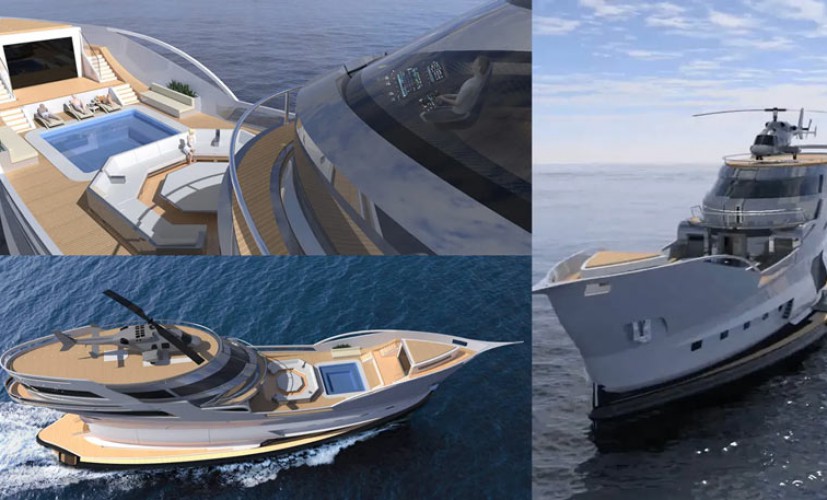 On the main deck is a dining area with a rectangular table that can seat ten guests. Other key features include a helipad on the upper deck, a 4.5m spa pool and a gym.

Traditional Asian sailing ships have their own special charm. It was this charm that inspired artist and designer George Lucian to create the concept of the 100m Origami yacht. 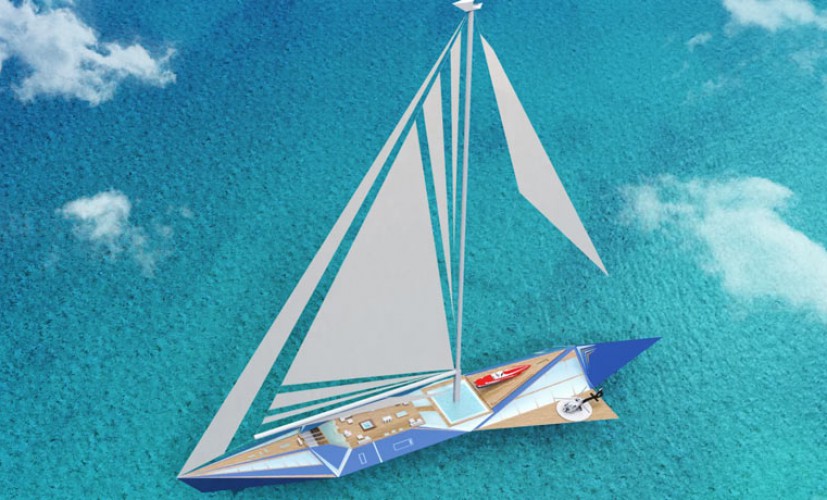 Lucian adds: “The project was created for an owner who is not afraid to go beyond the traditional forms of sailing yachts and surpass everything that has been built before in terms of design, technology and environmental friendliness.”

The 100m Intimisea emphasizes the space on board.

Among the features of the yacht are a helipad on the bow, a separate master deck (!), a gym, a cinema for 45 people and even a casino. The yacht accommodates 12 guests and 25 crew members, and her hull is designed for a cruising speed of 16 knots. 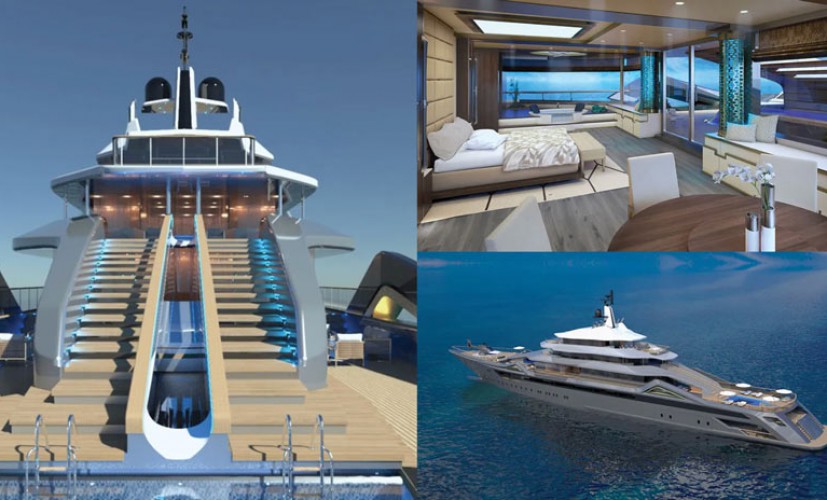 Although the project is still at the concept stage, it has already attracted the attention of brokerage firm SuperYachtsMonaco and potential construction partner Fincantieri Yachts. What's more, the Italian naval architecture studio Navirex has designed a steel hull that is designed for a top speed of 16.5 knots and a maximum cruising range of 6,000 nautical miles at 12 knots.

Created by Ricky Smith as an example of progressive superyacht design, the Era is an 80m beauty that immediately catches the eye with its bow design, bow deck superstructure and smooth, organic lines. Stuart Friezer Marine Naval Architects designed an underwater profile that was tested at Shanghai University. Thanks to this profile, the boat will be able to reach a maximum speed of 25 knots. 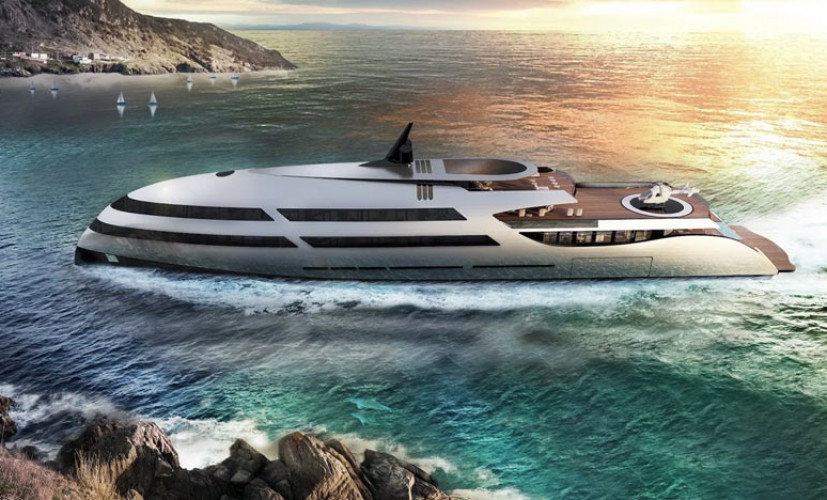 The yacht accommodates 20 guests and 24 crew members, and key features include a sunbathing area, main deck pool and dinghy garage.

Meanwhile, the superyacht's upper deck helipad makes full use of the yacht's 13m beam. This will allow you to easily transport Bell 427 or Eurocopter EC145.

The Streets of Monaco

This is not even a yacht in the usual sense of the word, but a whole floating city!

Yacht Island Design has created a 155m SWATH concept vessel called The Streets of Monaco. The design incorporates some of the Mediterranean Principality's famous landmarks, including the Hotel de Paris and the Casino on the upper deck. 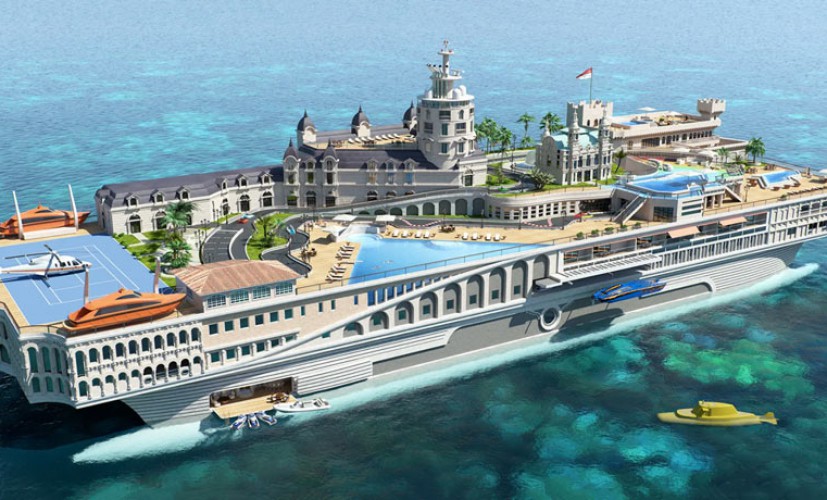 One of The Streets of Monaco's most ambitious ideas includes a fully functional go-kart track inspired by the famous Grand Prix circuit. Guests will be able to race like a Formula 1 driver through the tunnel, past the pool and try not to crash around La Rascasse.

The large atrium is the central hub of the yacht, connecting the various living spaces. The superyacht's ornate spiral staircase is the centerpiece of the waterfall, with a glass-bottomed fountain from the garden above. 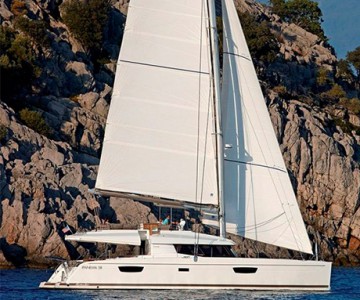 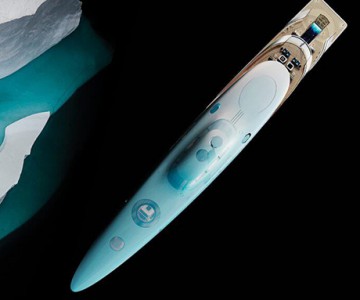 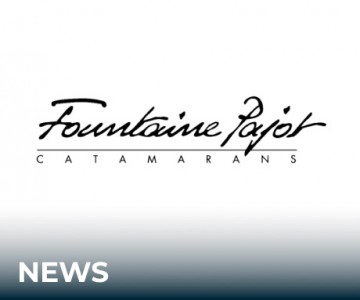 Interparus in touch! The other day we learned that Fountaine-Pajot will soon start producing motor versions of their catamarans in cooperation with a new partner. Let's talk about this collaboration.